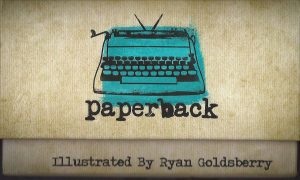 Dominion and Scrabble had a baby, and nine months later Paperback was born. No, really. Someone might take exception to this description, but I’ve found it wonderfully captures what you do in the game.

This is a deckbuilder – a game based around adding cards to your hand to give you more and better strategic options – where you’re purchasing letters and letter combos (e.g. th, tr, ck, es, etc.) worth varying numbers of points, which you use to build words. The total point value of the word is your buying power, which you use to buy higher-value and better cards, as well as cards that aren’t worth word-points but count toward endgame victory points. Many cards also have an ability attached to them – for example, “Gain $2 if this is the first letter in your word” or “Draw two extra cards next round if you use this letter” – allowing you to slowly build a word-engine that produces longer and higher-value words.

The cards are all pretty standard, and the box inserts are useful in organizing and re-packing the game. It’s not terribly fancy otherwise, though the (very light) writing theme on some components is pleasantly amusing.

Why This Works – Rewarding Creativity

Full disclosure, I don’t like Dominion that much, or most other deckbuilding games. They’re too solitary. And I don’t like Scrabble, but I adore Paperback. So why is this?

Scrabble looks like a game that rewards a large and varied vocabulary and lexical creativity, but in reality it’s largely an exercise in knowing the handful of obscure two- and three-letter words that you can squeeze into tight corners to maximize points. I can’t be the only English major to have left a game of Scrabble disappointed.

Dominion, on the other hand, is often an optimization puzzle based on the card abilities available to you. It feels somewhat lonely to me, even with the presence of the occasional “take that” card and robust engine-building possibilities with your deck. Deck builders that capture my attention usually have something else grafted onto the main structure to enhance my experience, often to enhance my interaction with other players.

Paperback isn’t terribly interactive, so that’s not where it bridges the gap for me. In fact, it’s one of the few games I really enjoy where I’m largely in my own headspace the entire time (this is exceedingly rare among my tastes). Watching the words others build is fun, but the game’s puzzle lies in your own hand.

So I suspect that it bridges the gap on the other end of those examples, by rewarding the sort of lexical creativity, as I put it, that I wish Scrabble had more of. Your hand will usually have a number of “wild cards” that can be any letter. These aren’t worth points toward your card buy, but allow you more wiggle room in which to incorporate all the cards you have that do score you points.

As a result, finding the right permutation of wilds and letters to make an 8-point word instead of a 7-point word feels like a tangible win for you and your knowledge base. It’s not a game that will reward the rote memorization of Scrabble, but rather the ability to adapt and look at the same deck of cards – and buying options available to you – in unique and unexpected ways.

For an example, in my most memorable play of this game, I built a deck that allowed me to alternate really short words in rounds for an opportunity to build really long, massive point-scoring ones in the next. But to maximize this strategic opportunity, I needed to be able to consistently come up with viable longer words. It was a great challenge. In the game’s final round, I used all 10 cards available to me to spell “abominable,” thus ending the game (and winning it). I was delighted at my execution on both sides of the game’s puzzle (deckbuilding and lexical).

That description above also serves as a warning. Adults will have distinct, categorical advantages over children. Native English speakers may have large advantages over non-native speakers. Someone whose strong suit is not spelling is likely to simply have a frustrating time.

Word games in general inherently limit their audience this way. I don’t count that as a knock on the game itself, because it’s an implied limitation of the genre. But it’s a major consideration for many.

The game also isn’t interactive in any meaningful sense (despite a handful of lightly “take that” cards that can optionally be removed). This is you and the cards off on your own, and your opponents and their cards off on their own. Which can still be fun, but won’t be everyone’s cup of tea.

It’s the particular type of brain burn that allows me to overlook that lack of interaction, but for many who prefer highly contentious games, it’s not here.

Paperback breaks my mind at times, and to clarify, this is one of the higher compliments I can pay to a game, because it means I’m so intensely focused on its possibilities that I enter a brain state of concentration that can be mentally exhausting but ultimately rewarding.

For clarity, this isn’t a state I want to enter often in my gaming; I play games to play with people, not rules systems. But I’ll break that rule on sporadic occasions provided everyone enjoys the premise.

I remain somewhat mystified at my love for it, frankly, because despite being a lifelong writer, I’m not always a lexophile when it comes to other types of word puzzles. But for those wordsmith gamers who enjoy creative applications of their talents, this may fit the bill.