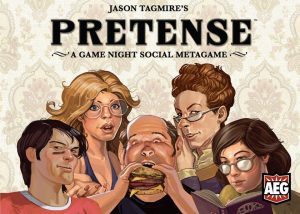 The Premise
Pretense is a game that happens concurrently with another activity, like a game night, party or event. Each participating player receives a card with a specific criteria (e.g. “Get another player to change the music”) upon which you can take their card, eliminating them from the game. You then take on their role with a new elimination criteria, since from that point on no one else would willingly change the music at your bidding.

Last one standing wins, or whoever has collected the most opponent cards by an appointed time.

The Components
This is a deliberately minimal microgame, so the components are not the point. However, the cards themselves and the little wallet they come in are functional and can slip in your pocket easily, making this an eminently portable game.

The Benefits and Limits of Micro
There are only so many roles, so it’s easy to learn them all and eventually sort of game the system by doing nothing that will lose you the game, which will ruin a bit of the fun. But it’s also eminently lightweight, which I’d consider a benefit for a game of this type. You can’t easily bring a full box with numerous components to, say, a music festival or pub. For some examples that highlight the strengths and drawbacks, the following are summaries of two of my plays:

The Ideal
I was at a Renaissance Festival, and we each had a card and played throughout the duration. Everyone took it seriously, but it was very much in the background of our day, at least until it was just me and another player. Neither of us knew what role the other had, and we were tied, so everything we did in proximity to the other was done with epic amounts of suspicion. I won by faking him out with a few false card triggers, which low-key set him up to do what I needed him to do (hand me money). One of the false flags I tried (tossing him something) would have won him the game if he had caught it. Instead, his paranoia caused him to drop it since I seemed excited for him to catch it. Great fun!

The…Less Than Ideal
It was a house party among gamers, and almost everyone had played. A few sort of forgot the game was happening and mentally checked out early in the party. Others struggled to remember who was and wasn’t playing (there were more at the party than were playing). Someone won with a card or two by night’s end, but no one really cared.

Extrapolating from those two examples (both of which really happened), there are some definite pros and cons to this format:

Variations on a Theme
There is a more recent game in this vein – Don’t Get Got – that adds thousands of new ways to get points at the expense of your fellow players, all within a “meta” situation of a party or game night.

I haven’t played it, but it seems really fun, and also like a natural progression of a game like Pretense, which was innovative when it was developed but now has competition. “Don’t Get Got” is the game I’m familiar with, but I also don’t imagine it’s the only of its type.

Pretense can deliver the same experience at this larger game, but by virtue of its size will not offer the same replayability or variance. However, it may be a good introduction to the concept to see if it’s for you.

Who Won’t Like This
If you think your reaction – or that of your friends – will be closer to the second scenario I described, it will be a dud. This is an inherently social, interactive and oblique game relative to a traditional sit-down-and-play game, so if you like the structure of traditional games, this also won’t be for you.

The Verdict
Pretense is a clever concept, but it’s small and thus limited in its execution, so there’s a ceiling on how much any one group will be able to get out of it. I’ll also admit to some exhaustion at having to play an ongoing metagame. Sometimes I’ll be in a mood where I’d want to play this type of game. Other times not at all. I ended up retiring it after a couple dud sessions because it didn’t seem to resonate with the gamers I hang out with, who are happy to play games but also don’t want to be worrying about a metagame all night when they’re otherwise enjoying themselves at a gathering, game night, party or event. Due to its miniscule size, it’s still in my collection as of this review, and with a new group it may get pulled again, but whether or not that will happen remains to be seen.