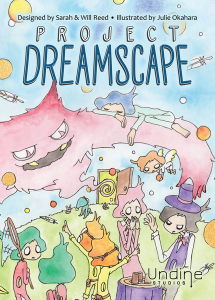 It’s easy for card games to get lost in the shuffle (har!) when they’re trying to make a name for themselves. To that end, probably the best thing Project Dreamscape (PD) has going for it is its unique premise. Scientists have created a way to harness the power of dreams?! And we’re in an experiment to lucid dream against others?! Awesome. So it’s delightful right from the start.

The box is pleasantly small. Everything fits comfortably with a little extra room, but there’s no wasted room. This make the game very portable. Which, for a light card game like this, is likely to be a benefit for many. 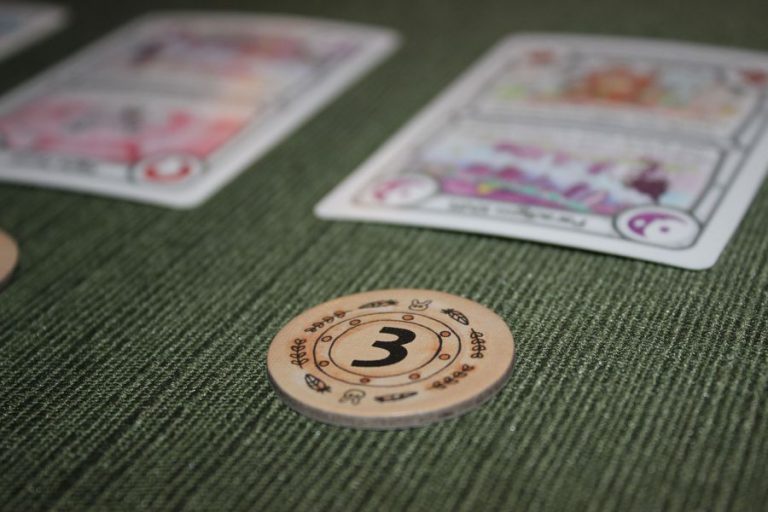 Sturdy cards and chips, and the rulebook is laid out well. It also does a nice job of clearly accounting for the myriad small questions and exceptions you’ll find once you start playing. It was clearly playtested quite thoroughly.

First, the good. The artwork is incredibly distinctive, and definitely helps to draw out the theme. The style is beautifully realized and consistent throughout. One of the KS rewards was a PDF art book, which was a nice touch. It added to the experience to peek into the artistic process behind the game’s creation. For many, the art will be a highlight of the game. 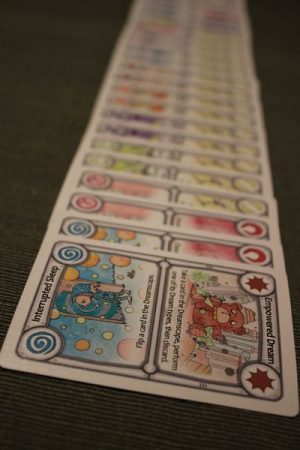 This distinctiveness can be a two-sided coin, though. I suspect not everyone will be on board with the art style. I saw a comment elsewhere that one gamer’s daughter thought the characters looked like zombies, and his son disliked the pastel palette that was used. Taste is subjective with these things, but depending on your tastes, both of those observations are entirely valid. So in creating artwork that’s certainly unique, it’s not going to appeal to everyone and may turn some people off.

Personally, I was initially a bit skeptical of the art style, but eventually warmed up to it. Anything that stands out without detracting from the experience is usually good in my book. But not all will have the same reaction.

The magic of the game comes in finding ways to chain together the various abilities to purchase multiple cards for less money, or make epic chains in your personal “REM Stack”

In that sense, the game shines, because there’s never a lack of options on most turns, giving you a lot to think about within a very simple framework.

The differences between 2P and 4P are stark. 2P is a much more controlled, strategic experience, because you’re building your REM Stack but only looking at one other stack. So there are a lot more defensive maneuvers and subtle plays. The 4P game is much more random, allows for less forward planning, and the number of cards (divided by players) means that you won’t get as much of a chance to build an impressive card chain. One player could get a lucky draw on one of his/her turns, and that could decide the game, because you’ll have less chance to catch up.

That difference will be a big deal for some. For me, it works much better as a 2P game. It’s fine with 4 – still definitely fun, and containing strategic possibilities – but this will be a more frequent 2P pull for me.

The “expansion cards” add three new dream types and allow for a lot of variance in the experience. The rules instruct you to add a new dream type in for one of the base types, keeping the number of cards static. This, in and of itself, can change up the game slightly and add some replay value.

With 3-4P, I’d say it might even be desirable to add in expansion cards without removing base dream types. It can add some much needed length to the game. Without explicitly recommending this, the designer and publisher have said the game will work with pretty much any combo of cards.

This is, admittedly, going off the tracks a bit. But the point is that the framework of the game allows for a lot of variance. Which is cool.

I’m not much of a solo gamer, but since PD came with a solo variant, I wanted to give it a try. Without another player at the table, making powerful chains is a lot easier. So the challenge becomes squeezing every last point out of your REM Stack.

It’s a much different experience, but quite fun.

And, as an example of the type of variation I’m talking about, for my first solo play I used the base deck and ended with 66 points. A decent score (a GREAT score in a competitive game, but scoring seems much easier in the solo variant). Then, in my second solo play, I added everything. All expansion cards, and I took nothing out. It was a fair amount longer (15-20min. longer) and I scored 140 points!

Here’s the table at the end of that particular session: 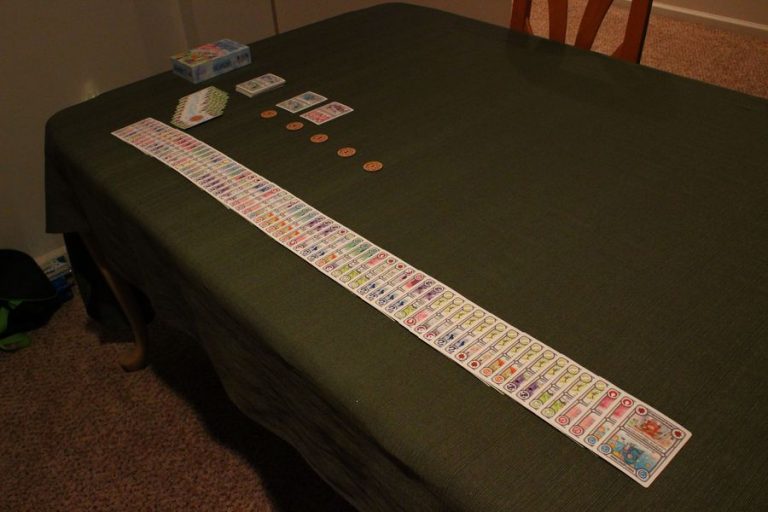 I suspect a 200 point game is possible with all cards included (and some luck!); I did well but could have done a bit better in a few areas. But the fact that it has me thinking about how a 200pt. game could happen is a sign of the fun I had playing it. If you’re a solo gamer, this game will not disappoint.

One downside to the many card types, changes in rules for the solo variant, and numerous chaining possibilities, is that it’s very hard to keep everything straight. The basic rule structure is very simple, but even in my most recent plays, I found myself having to re-read cards to remind myself of how they interacted, or check the rulebook to see what the differences were between solo and competitive (various abilities change in the variant). It pulled me out of the experience a couple times, and could be confusing to newer or younger gamers. For such an elegant structure, the fiddly bits of the rules can be somewhat cumbersome. This won’t be an issue for most seasoned gamers, but can be a consideration.

Second, the balance is theoretically equal for each player due to the random draw and shared card pool. In practice, you’ll get awesome and middling draws on various turns. This is part of the planned variance of the game, and is fine. But in my 4P experience, I felt like there wasn’t a lot of opportunity for an unlucky player to catch up. It’s not without possible fixes, as mentioned with the expansion cards. But, with the base rules, it’s a minor complaint.

This is a really good game. What I said earlier, about how it presents you with lots of strategic options within a simple framework, is the hallmark of a lot of good card games. I liken it a bit to Jaipur. The mechanics are different, but both are light, portable, fun card games with unique themes that blend luck with strategy, have elements of set collection, and have enough depth to reward multiple plays. What PD sacrifices in elegance (which Jaipur has in spades), it makes up for in the potential complexity of various card-chaining options.

My recommendation is less glowing as a 4P game, which limits its universality somewhat. But it still works well as a 4P game, really shines in 2P and solo play, and seems to have a lot of replay value.