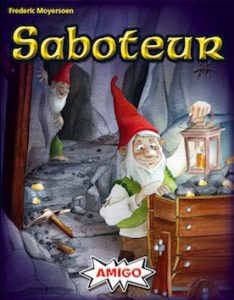 Saboteur is one of several games I discovered through online platforms during the COVID-19 lockdowns. Board Game Arena (BGA) hosts it, and I’m grateful to the site for keeping this gem alive for newer gamers.

In it, a number of gold diggers are accompanied by secret saboteurs (the number of each is variable based on player count). Each has similar cards to utilize, and the gold diggers must make their way by “digging” tunnels (placing cards) to reach one of three treasure cards some ways away. Under one of them lies their gold; under others, lumps of coal. The saboteurs must confound these efforts. Map cards allow you to look behind a treasure card to separate coal from gold, and everyone else has to decide whether or not to believe you if you decide to share the information. Your digging equipment can also be broken or repaired, so you can hinder your enemies, aid your allies (or yourself) with other cards that facilitate this.

The reason I’m grateful for having discovered this game is also because my local gaming club – forced to shift their meetups online during the COVID lockdowns – hosted a weekly digital gathering utilizing Discord and BGA. See, I had played Saboteur on BGA, but with strangers and with no direct interaction. It’s a decent enough game like this, but is missing something very tangible. With my friends, live in the same voice chat and able to strategize and theorize, hurling accusations and defenses of who the saboteurs might be, is when I truly discovered this game.

This is a hidden traitor game, but rare is the round in which you won’t find out exactly who the traitors are. At the start, everyone is cautious and wary. You can’t believe the first person who uses a map card, but may start to if another corroborates their information. Or, if they contradict the first, you have your first central tension. Eventually, it’s in the saboteurs’ interest to out themselves so that they don’t have to be half-helpful but can be fully unhelpful. Generally, the last 40% or so of the round sees the teams become obvious, at which point table talk doesn’t need to be guarded and open strategizing occurs between the teams. Or perhaps the gold digger team still only has partial information of the treasure cards, so the saboteurs’ tunnel placements can become double bluffs in the hope of leading the gold diggers to a coal card.

There’s a lot going on for a game where you only have to play a single card from your hand on your turn. What I think I appreciate most about it, though, is that it’s multiple types of experiences in the same game, and that each round creates a narrative arc. Since you might be a saboteur in each of the game’s three rounds, or none of them, there’s the first element that will change. The others are within the round. The opening of a round starts with methodical movement for the gold diggers, and attempts at “not helping without being obvious” for the traitors. Then, you’re slowly sussing out who to trust, and probably holding back some cards for the inevitable rainy day where a rockslide card ruins your plans. Then, the reveal of the traitor(s), usually with a devastating card that announces the villain to the table in dramatic fashion. Then, the harrowing cat & mouse of broken and repaired equipment, trying to help allies, and eking out those last few cards to get to what you hope is a golden treasure card.

There’s luck, certainly. Fortuitous card draws can torpedo even a well-planned collaboration. This isn’t a game aiming at perfect balance, though, nor does it need to be. There are also “take that” mechanics, though while you can be limited in your options with broken equipment, you can’t be knocked out entirely and can often still help in the form of repairs, breakages or rockslides (broken equipment only precludes tunnel placement). The outnumbered saboteurs, in fact, can count on being perpetually “broken” eventually, and so will often spend their most annoying tunnel cards to reveal themselves, saving their other cards for last.

Rounds feel quick, though full games are a bit longer than you’d expect. The box says 30 minutes, putting it in filler territory, but I’ve found even the comparatively speedy online version can slide well past that mark, especially as player count slides above five.

While we’re on player count, the game holds 3-10. I think seven is about the highest I’d want to take it, though. The downtime can become formidable relative to how little you’ll have to do on each turn, especially if you’re “broken” early. There’s also a loss of agency when what’s happening on the tableau is only 1/10 your doing at the highest count. Its lowest player counts seem equally silly. This is a group game, best enjoyed with multiple personalities bouncing off of one another. Board Game Geek lists 7-8 as the ideal, and I’d personally amend the sweet spot slightly, to 5-7. That requirement may turn some groups off, and rightly so if you usually play with 2-4, but if you play a lot in that 5-8P range, this should work well.

A Note on Balance

I’ve heard grumbles of balance issues at various player counts, such as 4P with only one traitor. Other player counts can feature variable traitor counts, like 2-3 at 7P. And yes, you might be a traitor in a round with less chance for the traitors than the subsequent rounds where you aren’t a traitor.

While the card draws can equalize this to an extent, I certainly won’t deny that it’s not always weighted the same for each side. For a game like this, though, I’m not concerned about absolute balance. It’s missing the forest for the trees, imo. FWIW, in my anecdotal experience, I’ve seen both sides win enough at multiple player counts and traitor configurations that I can’t bring myself to worry about it.

But it may also be another reason to avoid the game at low player counts.

Conclusion
The above, though, is at least partially high-minded reviewer pablum. Let’s state it plainly: Saboteur is fun, and it doesn’t take itself too seriously.

I can say it’s a hidden traitor game that succeeds in becoming more than mere finger-pointing, and that’s true enough. The traitor dynamic actually informs the game’s tactical puzzle, which isn’t the deepest in the hobby, but rarely fails to be interesting, tense and rewarding of clever play. But all the talk of rewarding cleverness and having narrative arcs is window dressing. Sometimes you’ll have a stupidly unlucky round and feel like you’ve been made a fool of by the game. But that has just as much potential to be funny as when you save your sabotaging rockslide for the perfect moment to crush the dreams of the gold diggers, or when your last draw nets you the card that will reach the gold.

And that’s the point, I think, or at least what I took away from it.