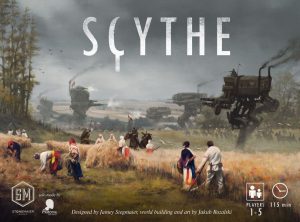 What’s in a Name? 4X Games in Modern Board Gaming

There are few games that have inspired as many think pieces in the modern hobby than Scythe. It’s at once a beloved and polarizing game. I enjoy the discussion surrounding it, though, because it often illuminates how we think about games.

Take, for example, the claim that Scythe is a “4x” game. For those unaware of the term, the four X’s are Explore, Expand, Exploit and Exterminate. They each represent a certain type of gameplay, and suggest certain mechanics.

The term has its roots in video games, and hails from the early 90s, where space and land empire-builders began to gain popularity. The term migrated to board games and has become quite entrenched there.

The term is also occasionally polarizing. Scythe, many will claim, is NOT 4x. Specifically, its combat is both optional and lacking teeth compared to most that bear the moniker. These distinctions matter to many, and not without reason, since it can be the difference between excitement and disappointment at a new game. With more and more purchases becoming very expensive, knowing where a game stands in relation to your preferences is more important than ever.

Personally, I don’t much care if it’s 3.5X or 4. Mind you, I don’t disagree with the assessment. It’s absolutely a Euro gamer’s version of a 4x game, often lacking the vitriol of even tamer area control games. Knowing this, though, we can adjust our expectations accordingly.

Having 3.5 of the X’s is also no sin. Frankly, the video games that gave rise to the term are probably a bit better suited to handle the weight of so much expectation.

The old Civilization games, for example, which were some of the earliest popular games of this type, would be played over dozens of hours and multiple sessions. I find it telling that the recommendation forum on Board Game Geek never goes long without someone popping in looking for a 4x title that doesn’t take too long to play. It’s a new struggle in design that I’m not sure anyone has quite solved. Someone will inevitably crack the nut (or maybe already has), and there will be much rejoicing.

In most games of the type, though, there is a price of entry to get all four X’s, and that price is often a lengthy, intricate rulebook and an intimidating play time for many groups.

Scythe, then, feels somewhat remarkable to me in its design, that it packs so many types of experiences into something that’s eminently coherent, and has manageable complexity and play length.

Scythe: Jack of All, Master of None

If Scythe does many of these elements admirably well, I think it’s also fair to say it does none of them remarkably. The early game is invariably a bit slow and lonely, only really becoming exciting when the tunnels, mechs and unlocked special abilities allow for the type of creativity that can raise eyebrows and inspire shocked reactions from around the table. By that point, though, the game is often in its last turns.

It’s also a bit of an engine builder hiding in the guise of an area control game. Or maybe an area control game in the guise of an engine builder. Again, no sin, but it also pulls the game in yet more directions in a mere two hours, which means it’s unlikely to exceed the expectations of gamers who love one of those game types or the other, but not both at once.

The result, for me, is a game that is solid and satisfying for omni-gamers without strong genre preferences, but not transcendent in the way I think of some titles that share the same literal and figurative weight of Scythe and its premise. There’s a fine line between leaving players wanting more and those same players finishing the game feeling like it never fully sprang to life. I think most of the game’s detractors fall on the latter spectrum, while its fans fall on the former.

Ultimately, I enjoy myself when playing. There are worse things to be than “solid and satisfying,” so I’m a fan, albeit not enough of one to want it in my personal collection.

I also want to mention the components and art briefly. They’re splendid, per Stonemaier Games’s usual, but I find it amusing that when Scythe came out, it was considered the height of gaming opulence. I think time has shown us that it was merely the first of a trend. These days, every month on Kickstarter there are multiple $100+ games whose production values almost make Scythe look humble by comparison.

And yet. Scythe’s artwork and production has a very defined sense of place. While it’s fictional, it all has a pseudo-historical Eastern European vibe mixed with a touch of steampunk, and everything about the game is specific, consistent and evocative.

Let’s be clear with this, though: the game does nothing to recreate anything with historical accuracy. Those who are concerned about a nuanced look at Eastern European civilization at any point in its history should look elsewhere. The game borrows an idiom; nothing more. This will turn off some whose preferred gaming is more steeped in historical arguments.

That said, I can sense the setting in Scythe more so than many other so-called “overproduced” games, where the absurdly detailed plastic bits steal the spotlight at the expense of the whole.

This (highly produced games) is one of the things Stonemaier helped to popularize but, I think, is something that other companies sort of misunderstood. Opulence itself isn’t the point. A consistent sense of theme and setting is. Love it or hate the game itself, the components and art of Viticulture, for example, are similarly evocative. Each element enhances the overarching setting rather than competing for individual attention. While I can’t say this for every Stonemaier product, I can say it for the best of them.

I’m tired of pretending to be impressed with a gigantic miniature, but I’ll never tire of a setting with a strong sense of self. Scythe has that, for which I’m grateful.