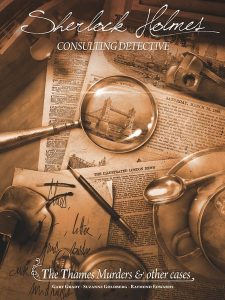 You’re given a case intro, and left with a large, intricate map of Victorian London with literally hundreds of possible places to visit. You also receive newspapers for various dates that correspond to cases, case booklets and something like a phone directory of addresses in the city. From the clues in the case’s intro, and a few other bits of advice the rules give you, you make your way through as many stops as you want, reading text and piecing together clues. Unlike CYOAs, there isn’t “go to A or B” forking of options. Rather, a lead may go dead (or, more frequently, be a red herring), or you may resolve a particular thread, and you’re once again left with the enormity of London to choose from.

The case is over when you decide it is, and you receive a score based on the number of stops you made as well as how many questions about the case you’re able to answer. You’re ostensibly competing with Sherlock himself, whose methods are often ludicrously swift. Common wisdom surrounding the game is to ignore the faux-competition with Sherlock’s scores and simply take the cases at your own pace.

The game can be played competitively but is mostly intended as a co-op game, with players taking turns choosing destinations and reading the text associated with locations. Cases are unique and thus not playable a second time.

I have the original, older version but have seen newer ones, where the booklets are of nicer quality. There’s a charm to receiving a map, an elaborate directory, case booklets and a book of location text, and being told to set off. The map is superb and succeeds is transporting you to the time period. Since much of the game is played in your mind and/or conversation with fellow players, being evocative without overbearing is a good quality for the materials you get.

Sherlock succeeds where others fail because it doesn’t hold your hand and trusts you to squeeze entertainment out of its legitimately difficult cases. My favorite line in regard to the play experience is that it makes me feel like Sherlock Holmes, or rather, his less intelligent but still enthusiastic brother or assistant. If there is pleasure in puzzles, Sherlock gives you a bunch of great ones. With some, you absolutely won’t come to the correct conclusions. But seeing how and why you were wrong is often just as fun. The pleasure is in the journey. The endgame’s questions – and particularly some of the more-arbitrary secondary questions (which aren’t necessarily tied to the main case but are ancillary mysteries) – are just the bookend on where the meat of the game lies. Your score mostly doesn’t matter; but the amount of intellectual and emotional energy that you invest into getting to it does.

The newspaper also generally helps with the case, but can also provide fun little anecdotes and side mysteries that you may or may not encounter (and solve!) in the course of your investigation. This is wonderful. The world feels alive because of this, especially since there are always multiple unrelated threads that – if you’re curious – you can always investigate, and that curiosity is usually rewarded.

This is a deliberate game, one that involves a lot of reading, a lot of note-taking (you can’t reference past locations after you’re done with them, so notes are important) and that, ideally, includes extended periods between turns where you simply think about what you know, what you suspect, and where you might go to best uncover the remaining details.

The first time I played this, my SO and I decided it was best if we simply took a break to think things through. We made dinner, ate, then went for a walk. And a magical thing happened: we were talking about the case nearly the entire time. That is a level of immersion that most games can only dream of.

On the other hand, if the idea of reading a bunch, and writing a bunch, doesn’t sound like a fun game night to you, it might not be your cup of English Breakfast. Which is perfectly valid. Sherlock is a game that, to me, doesn’t aim for broad appeal but rather hyper-specific appeal that will be an amazing experience for those who enjoy the format.

Additionally, this is a game that can take 45 minutes or four hours. However, it’s also one that you can come back to, notes in hand, if four hours is too long for a single sitting. So I wouldn’t play with strangers, but would be happy to schedule a game night with close friends, then schedule a follow-up if needed to finish a particular case.

Sherlock is one of my favorite games, so it legitimately angers me that some of the cases are marred by text errors that make them more difficult or, worse, unsolvable.

Mind you, this is rare. But their presence at all is unacceptable for such a game. There are some well-made threads by well-meaning folks over at Board Game Geek that detail the errors in as close to spoiler-free fashion as possible. Here’s one good thread (which doubles as a review), and here’s another. They’re worth checking out before you play. However, compounding this is the fact that there are multiple editions with different case order, so make sure you’re comparing apples to apples when, for example, an errata thread references “Case #3.” Text errors in most games are  amild inconvenience. Here, they can be game-killing. It’s really the only major thing separating this from a different stratosphere of quality.

I have one more nit to pick here, and while it’s not strictly an error, it’s something that bugs me. There is at least one case where you basically need to reference a previous case’s newspaper to solve it properly. It’s one thing if you’re playing these back to back with the same group. But I was playing the case years after the previous one, with a new person. The rules briefly mention you may have to read past newspapers, but how many groups are reading all 10 once they’re on case #10?

This is poor design. I get that it’s to create realism, but the case’s newspaper should be the only one you need to reference. That was my only poor session (though by her account, my friend still enjoyed herself), and it could easily be avoided.

There are a handful of out of print expansions. One that has had a recent printing and is comparatively easier to get is the Jack the Ripper and West End Adventures cases. These match the idiom of the original quite well, with the caveat that the Jack the Ripper cases are considerably more geared toward adults. If you’re playing with children, you may wish to skip these four and go to the remaining six.

Even more recently, a “Baker Street Irregulars” expansion was released. I haven’t been able to dive into these cases.

Some will decry the number of cases (10) and the fact that once you play them, that’s it. To this, I say yes, that’s it. But boy, there’s a lot packed into those 10 cases. If I could get 10 sessions of most games that are as rich and memorable as any case in SHCD, I’d be perfectly content having purchased that game. There are some games that transcend the need to play over and over again. I’ve spoken to gamers who are happy with their purchase of Twilight Imperium, for example, who might play once every other year. The experience is more than worth it. For me, SHCD falls into that category, and it’s not nearly as cumbersome as something like TI in terms of shelf space and price.

And if you’re really a junkie for this stuff, you may be able to track down the older expansions, and there is also a spiritual successor, Mythos Tales, which adds some new mechanics and adopts a Lovecraftian theme, but retains the same style of gameplay.

Sherlock is a near-perfect thematic experience for me. I say near, because the text errors – which seem to plague every edition in some form – mar an otherwise thrilling deductive experience. Some won’t appreciate the format, and others will scoff at the impossible solutions Holmes seems to conjure from thin air, which will take you many more steps to figure out.

But for gamers looking to channel their inner Sherlock, and are more interested in the journey than the destination, I know of few other products that deliver on their premise so fully.