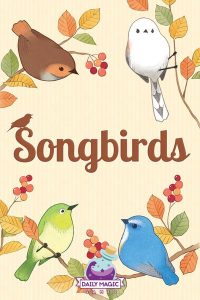 Songbirds vs. Birdie Fight – What’s In a Name?

Songbirds used to be called “Birdie Fight,” the translation from its original Japanese. Which to my ear is objectively cooler. I’ve gotten a number of my friends to start calling it that, and we’re very pleased with ourselves. Alas, the rest of the world knows it now as Songbirds.

Songbirds is a very quick tableau-building card game, wherein you’re making rows and columns of birds, numbered 1-7 in four different suits. Depending on the numbers involved, a particular color will “win” a row, which are worth a slightly randomized number of points (from among 10 possible point totals).

The rub is in two elements: one, if two suits tie (say, 7+2 vs. 6+3), their songs cancel out (or, in my superior fight-themed Birdie Fight, they peck each other to death), and the suit in third place takes the row or column. Second, you will only score points of the suit of your lone unplayed card. Which means every other card will be used to try to manipulate the tableau in your favor, via ties and splitting the number of columns/rows each color wins, and you may hold back a couple card suits to determine which has a better chance at game’s end with your last play.

This is a minimal game, but the card art is quite lovely. Birds aren’t as varied as, say, Wingspan, but they’re not meant to be. There’s not much more to say than that.

Songbirds is not a complicated game. Anyone can learn in moments. The game is also quick enough that no amount of overthinking will push the play time above, say, 20 minutes (and it’s usually less). Yet, you’ll have a number of interesting or vexing decisions to make. There’s something I can only describe as clever about the conundrum of scoring the card suit that you keep. You’re at an apparent disadvantage as you play, say, a rival 6- or 7-value card on the table, hoping you didn’t just push a different color to the win. It’s also a treat not knowing what your opponents are jostling for, or perhaps deducing it based on their actions and thwarting them.

It’s all very subtle, and it’s over quickly.

One downside I can note is that despite being able to decide what card you keep, there’s something that feels arbitrary about it, like you’re never sure it’s the right play, and have no way of ever knowing until the game is over and you’re scoring. There’s something fun in this kind of uncertainty for some, but it can be frustrating for some other players. Similarly, your first two or three card plays can feel a bit pointless, since you don’t have enough information to really start to craft the tableau to your liking. There are interesting decision points here, but rarely in your opening turn or two.

Arboretum is the more popular of these two, and is the closest comparison to Songbirds. The two aren’t exactly apples to apples, but it’s beautiful, nature-based cards with numbers on them that you use to build a tableau of certain types, and your score is dependent on what you hang onto. The same DNA is all there.

While I wouldn’t call Arboretum complicated, it’s certainly a step up from Songbirds. Or you might look at it the opposite way and call Songbirds a more streamlined version of Arboretum.

If the premise of Songbirds seems clever to you, but it lacks enough heft to sustain your interest, I’d encourage you to check out Arboretum.

Conversely, if what you’re looking for is a clever, thoughtful, but uncomplicated filler, Songbirds plays in less time and is easier to wrap your head around. Arboretum’s additional length and complexity initially seem marginal, but in practice it puts the game in competition with the larger world of 30-45 minute gateway style games, instead of the 10-20 minute fillers that Songbirds competes with.

I’m not sure I’ve introduced this to someone who’s disliked it. I think indifference is the strongest negative reaction it’s likely to engender.

That said, it’s a light filler with some-but-not-a-ton of strategy, so there’s a niche it’s filling. If you don’t like that niche or don’t need it filled, there’s nothing to look at here.

Songbirds won’t show up on any “best of” lists. Despite the fact that I really enjoy it, I have no hesitation is saying that Arboretum is the superior game, for example.

But I play Songbirds far more often, not Arboretum. It’s also the one that floated in and out of my collection. I sold it to a friend for a beer, but I still enjoy revisiting it. And that’s because despite being in the same conceptual space, Songbirds fulfills a different purpose at the table, that of a palette cleanser between games or after a game, or when I have 15 minutes to kill with a friend or family member in a bar. I genuinely like Songbirds, and my friends like it, and it’s never even mildly difficult to teach or play, and that counts for a lot.