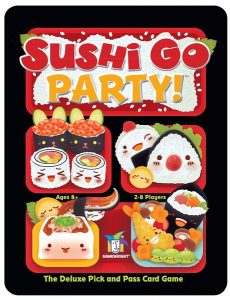 If I ever want to remember the value of FLGSs (Friendly Local Game Stores) as opposed to the Amazons of the world, I think of Sushi Go Party.

I was up the street at the nearest FLGS to me (a great store!) and about to buy Sushi Go for a party I was hosting. “Oh, get Sushi Go Party. Tons more options. It’s like $10 more but it’s so much better,” said the owner/clerk. Not wanting to seem ungrateful, and also having never gotten such a specific, unambiguous recommendation, I took his advice.

I am thankful for that fact. I was responsible for introducing the game to my gaming club, and it caught on like wildfire. I rarely bring my copy to our large meetups anymore, but rare is the week where there isn’t a copy on the communal game table.

This “pick & pass,” set collection card game, in the vein of 7 Wonders, is among a small pile of games I consider to be best in class for their particular type of game. Now to define the type (beyond mechanics and theme) and identify why it succeeds…

One to Many – The Design of Sushi Go Party

Sushi Go Party is a master class in getting a lot from a little. The premise and mechanics are identical regardless of which cards you choose. Anyone can understand it: pick a card, play a card, pass cards, repeat, then score points when the cards run out. The only variance is how the cards score points.

The nigiri is just worth a static number of points. Type X and Type Y are five points for getting two and 10 points for getting three, respectively. Simplicity itself, but something else is going on here. The game is teaching you the more exotic card combos with the starter cards. The concepts that the game riffs on in its more advanced configurations will be familiar to anyone who has played with the “starter” cards, and after you’ve played it once or twice, there are generally only 1-2 card types that take even a moment to absorb into your strategy.

So it’s simple, and thus at risk of becoming stale, right? Well…

The robust number of card types available, and the myriad ways they can be combined for slightly or significantly different configurations, provide ample variance even for regular gamers who play this game numerous times.

So it’s a master class in creating staggering variance from an absurdly simple premise. In this regard, it has few peers within the hobby.

Ok, sure, there’s some embellishment above. A game this simple isn’t going to be endlessly entertaining. While the theoretical number of permutations is functionally infinite, the game will produce the same type of experience in many of its plays. Only 2-3 of the more abstruse card abilities will produce sessions that feel markedly different from the norm. These are undeniably cool, but also quirky in ways that feel a bit more rough than the comparatively intuitive and elegant starter cards (and others like them).

I’ve gotten to the point where I try to mix and match card abilities in ways that don’t quite make sense or are just a bit weird compared to the “norm.” I personally enjoy this experimentation, but it’s not always the smoothest gameplay for the rest of the table.

Alone Together? It Depends

I enjoy personal interaction in games. Certain cards in Sushi Go Party (the notorious Miso Soup foremost among them) create a sense of togetherness. You can also deny the player next to you from getting a valuable card or two, and the endgame dessert scoring demands that you pay attention to everyone’s long-term strategies. Still, some of the game can be played with myopic blinders on.

It’s a small, quick game, though. If I can cite 3-4 ways in which interaction is created, as I did above, it means there are moments enough to satiate social gamers, even if your neighbors’ cards won’t always demand your attention.

Set your expectations accordingly, I guess. This isn’t high strategy. Heck, it’s not even 7 Wonders in terms of depth. But it’s more approachable than 7 Wonders, which itself is a reasonable on-ramp to several ideas that are prominent in modern card games.

If “ability to get to the table” with a variety of gamer types and group sizes is a variable you value in a collection, and you want those games to still be as fun as possible, Sushi Go Party will be a no-brainer for most.