Tales of the Arabian Nights Board Game Review 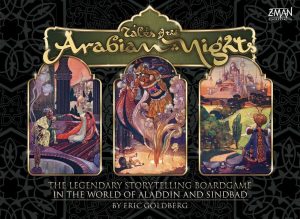 Based explicitly on the famous 1,001 Nights tales, this adventuring, storytelling game throws you into a journey through ancient, magical lands.

In Tales of the Arabian Nights, you choose a character and begin in the city of Baghdad, and make your way around the surrounding lands in search of treasure and adventure. Each player has an optional Quest with larger-than-normal rewards if completed, and will acquire rewards at each stop they make as they have Encounters at each. Most importantly, you will acquire (and lose) Story Points and Destiny Points, which will combine to equal your win total (20). Additionally, you’ll start with and acquire Skills (which can help you in encounters), Treasure (which can add to your wealth and offer special bonuses), and Statuses (which can be good or bad and have rules assigned to each).

There’s a lot of them, and they’re all pretty great. Of special interest is the main board itself, which is a minor wonder that will instantly hook many players. Individual player boards are pleasantly thick and the other cards and components are not particularly fancy but also eminently serviceable. In a game that could probably be an extra $20-30 with needlessly fancy minis and chips, it’s an excellent mix of the beautiful and merely functional.

Lastly, the Book of Tales is a massive, intimidating books of, well, tales, and there are thousands of individual tales to digest, more than anyone is likely to ever see in even 100 playthroughs.

Encounters are the heart of the game, and involve at least one, and sometimes a series, of simple decisions based on the encounter you draw. Do you want to Attack, Avoid, Pray, or perform one of 5-6 other options when you encounter a Lion, for example. If you attack, the Weapon Use skill may aid you, if you have it, or other similar skills.

Resolving the encounter involves players to your right and left, who will be working together to find the appropriate story number in the Book of Tales. The storyteller (to your right) will narrate your story, and offer you any relevant decisions. Based on your decisions – and occasionally on what Skills you possess – the encounter will resolve with a series of rewards and/or punishments. The storyteller is expected to narrate as dramatically as possible, to match the fever pitch of many of the story blurbs you’ll play through.

There are a staggering number of encounter and story options, based on the number of encounter cards, and dice rolls you’ll make that will subtly shift the encounters. The Book of Tales has somewhere in the neighborhood of 3,000 keyed encounter narrations, many with numerous possible outcomes. In any given game you will never see more than about 80-100 between all players, and the way in which they mix and match to provide different collective stories for your characters makes them functionally infinite.

The Feel of Play

This is a storytelling game, not a highly strategic game. Furthermore, while the individual stories can be exciting, and you can often rationalize one story with another in your adventure to form a meta-story for your character, sometimes the stories will feel somewhat (or entirely) arbitrary.

The writing is generally excellent and lots of exciting (or terrible) things will happen to you in every game. So that’s good.

This is also not a game for those expecting to be super heroic adventurers. Bad things are going to happen to you. And if you play with enough people or enough times, eventually some really, really horrible situations will occur. As a real example from my very first play, I had a combination of statuses that required me to sacrifice Destiny Points to get rid of the status, but all of my Destiny Points had to go to another player due to another status. Additionally, I was Lost and could barely move (movement one), then got the Diseased status, which brought my movement down one to zero. Additionally, I was Insane, so another player was choosing my reactions in Encounter. So to recap: I couldn’t move, couldn’t make decisions for myself, and was giving most of my rewards to another player.

Eventually I would have dug out from this pit, but I was barely a player at that point and ended the game in this state after multiple rounds of futility. I mention this story to make two points:

Downtime and the Central Hook of Play

Downtime isn’t frequent in most games, since two other players (or the other player in a 2p game) are involved in storytelling. However, it can occasionally be a chore to navigate the matrices to figure out your story. In general, though, if downtime is an issue, there’s a larger issue: everyone else’s turn should be nearly as interesting or funny since this is a storytelling experience.

This is the only game where I can truly say I enjoy other players’ turns as much as my own. If that’s not the case for you, though, it’s not the issue of downtime that’s the problem, but that the game’s structure hasn’t gripped you meaningfully. Conversely, if you enjoy the structure, no amount of downtime between your turns will seem burdensome.

There is a solo variant, and as storytelling exercises go, I think you could have a lot of fun playing by yourself. I’ve done this a couple times (and will likely play it solo again, despite not being a huge solo gamer) and enjoyed it, though a large portion of the magic is lost without others to join in the fun.

I’ve also used my solo play(s) to generate ideas for my Dungeons & Dragons games. Anyone familiar with D&D knows that many supplements include lengthy random tables for generating story ideas. Tales of the Arabian Nights is arguably one of the best tables of this kind in existence.

A Note on the Cultural Elements

The rulebook acknowledges that women were not considered equal to men in the time period in which this was based, and that every effort was made to display them at their best in the game. This is a good, proactive approach to respecting modern sensibilities.

However, other elements haven’t aged as well. In base rules, you can only seduce or court those of the opposite sex. We house rule this away, and nothing bad has come of it. Additionally, you can’t win the game while sex-changed; a bizarre decision imo. Also, slavery is a thing that existed in the world of the 1,001 Nights, so it exists here. You can encounter or even become a slave via misfortune. The game doesn’t highlight this to any onerous degree imo, it’s not presented as a virtuous act, and they’re also rare occurrences. But it is present. If this turns you off from the game, that’s a valid reaction and you’ll get no pushback from me. I’m personally of the mind that as long as these elements aren’t glorified and have historical precedent within the setting, they’re not out of place. But I also don’t presume to make that decision for anyone else, nor will it be fun for everyone.

I haven’t encountered much outside of these that seems out of place with modern sensibilities. Your mileage may vary. I play with a diverse group here in my hometown. Women, PoC, LGBT…when Tales hasn’t landed with some of them, it’s because the game’s structure doesn’t give them enough strategy to sink into. The cultural stuff hasn’t been an issue. None of us speak for everyone though, so while I don’t think it will be an issue for many groups, to a large extent it feels like a product of the era it was created in (mid-80’s).

The rulebook actively encourages changes to the base rules to cater to your group, and this is a game that will not suffer from numerous house rules to make the experience better.

In particular, for your first play or two, and any time you play with 5-6P, I would recommend lowering the win total from 20 to something more manageable, like 12-14. The game can run long at any player count, and the possibility of downtime at 5-6P means that mitigating the length will make it a better experience for many.

Additionally, when I play we split the deck up to cycle through Day/Noon/Night encounters more quickly, allow for same-sex courtship, and run a house rule on the brutal Grief Stricken status card to limit the time you can have it.

Some groups house rule the number of statuses you can have, to avoid horrible situations like I described above. I personally wouldn’t use this one, since I think that’s part of the fun, but I would definitely consider it if I were playing with children, for example. Other examples abound, but it’s a game that rewards these small tweaks, and doesn’t break under them.

Tales of the Arabian Nights – Conclusions

It’s true of any game that it’s dependent on the group’s sensibilities, but I feel like it’s especially true here. If you are looking for a coherent storytelling experience and/or a logical, structured or strategic adventure, look elsewhere. But if you’re willing to suspend some disbelief, talk in funny voices and laugh at your friends for all the zany sh*t happening to them, this will be a great addition to your collection. I can count on one hand the number of board games that have made me laugh as hard as Tales, but I could also see another gamer hating the same experience.

This isn’t a game you control and master. It’s a game you dive into and let it happen to you. If you’re ok with that, it’s frequently a wild ride.

It’s also fair to say that Tales has no true equal in board gaming. Put together 8-10 Choose Your Own Adventure novels that each player navigates simultaneously, and you’d start to approximate the amount of content that’s here. That alone makes it noteworthy, though again, not for every collection.

One of my favorite comments I’ve seen about the game is along the lines of this: “If you have Tales on your shelf, it tells me you are in this hobby for all the right reasons.” This isn’t to say Tales is a perfect game, or for everyone, or that there are “wrong” reasons to be in the board gaming hobby. But its presence in a collection is an affirmation that you value the shared social experience of gaming, not just the drier mechanics or the pursuit of victory. It means you love crafting and sharing stories with friends. And when it works, it’s a beautiful thing.