The Crew: The Quest for Planet Nine Review 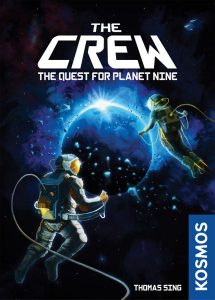 I recently reviewed The Mind, a game in the same lineage as The Crew, and it’s a remarkably positive review for a game that’s both simple and (imo bizarrely) controversial. Still, The Mind made enough of a splash to get a lot of attention, even if the praise was mixed.

The Crew irons out what I assume was the most-cited flaw of The Mind: its utter randomness. Or at least seeming randomness, since I can attest to at least some amount of strategy in it.

The Crew takes the same central conceit – no one can talk to one another – and layers a basic cooperative trick-taking game on top of it. Like The Mind, it will ramp up the difficulty round-to-round in progressive manner. It does this by restricting the tricks. In this round, it will tell you, Player A needs to win a trick, then Player B. In the next round, same thing, but now Player A has to win a trick in a certain suit. And so on for dozens of iterations, mixing and matching a few variables to become progressively harder.

To help, you’re (usually) permitted one silent clue that shows one of your cards to everyone else and tells them one of a few things about it.

This is a negative review, and The Crew has been one of the more beloved games to come out in recent years.

I’m not writing to fight with the prevailing opinion on the game, nor to sully anyone’s fun with it. I begrudge no one their love of games. But rather, it’s to present the minority opinion from someone who was excited about the game, wanted to enjoy it, but for whom it fell entirely flat.

A quick perusal of my reviews will show that I appreciate themes in games, but don’t consider it a prerequisite to enjoying a game. It’s only when none need be present that its inclusion seems odd to me.

The Crew has a “story” that is told between rounds, and is tangentially related to the mechanics of each new round. It’s something to do with a space crew.

It’s laughable. Embarrassing, almost. I can’t remember any of it because it’s so forgettable.

Maybe it’s because I first played this in the midst of some deeply thematic games. I just couldn’t help but blink in disbelief, though, at the attempted thematic integration with an entirely abstract card game that doesn’t need a theme.

Anyway, whatever. It’s ignorable but clearly not game-killing. What’s next?

I guess the novelty of the progressive demands is the variance some need for this to feel fresh. Once that feeling wears off, though (and it did for me quite quickly), you’re left with every other trick-taking game I’ve ever played. And what’s more, it’s not a more interesting trick-taking game than several I’ve played.

There are games that don’t hide that randomness determines their outcomes a large portion of the time. If executed well, it’s possible to ride this randomness like a wave and enjoy it.

Outcomes of a lot of hands in The Crew will be determined by luck of the draw (or at least heavily influenced by it), but it’s clearly selling itself as a strategic puzzle. This incongruency grates on me.

Sometimes we play just right and pass to the next difficulty in The Crew. That feels good, as it should. Just as often, though (especially beyond the introductory missions) it feels like mathematical attrition. We need a certain distribution of cards to have a reasonable chance of clearing the stage, or we have to play perfectly. In so many of these rounds, it’s victory by brute force, not clever play.

That doesn’t feel like good design to me. Granted, better play might yield a better strategy-to-luck ratio (I’m far from a whiz at the game), but I’ve played with seasoned gamers who should be able to mitigate a fair amount of luck. Alas, luck still seems like a large enough force that I’m turned off by it.

Or maybe it’s not trying to be a logical strategy game, and the luck is to make it more palatable for casual gamers. In that case, I feel even more cheated since it’s clear what I do isn’t as important as what cards I’m dealt. If we use Hanabi as a template in a somewhat similar mold, that game is significantly less frustrating on a round-to-round basis.

Cooperative games have historically had the problem of one experienced player determining actions (or even suggesting actions) for others, which takes away their agency. Games find various ways of getting around this, like having hidden information (like this game) or secret objectives. The Crew should be safe in this realm.

However, the confluence of player clues and what you’re dealt means that you’ll sometimes know what needs to be played, even while other players struggle to piece together the same puzzle. But you can’t speak, so you’re suddenly a ball of anxious demand, hoping others figure out what you know. It’s a cauldron for being upset, for example, that someone led with the “wrong” suit that loses the round.

It’s not quite allowing for an “alpha” gamer, so to speak. But depending on card draw, it could be giving them the keys to the car, then telling them they can’t drive it, which may be even worse.

I can’t wrap my mind quickly around some of the scenarios in The Crew. Often, I grok what we need to do instantly, but other times the timing of various off-suit plays and such flummoxes me. This is frustrating enough, especially since I don’t lack experience in other trick-taking games. So as I’ve made some wrong plays, and get called out for them by other players, the only effect it’s had on me is to make me never want to play it again.

This is a group dynamic issue, not necessarily a game issue. Or is it? I’ve experienced variations on this phenomenon in three separate groups, two of which I game with regularly and generally have zero problems with. The feeling I had afterward ranged from mild annoyance to “I want to go home now.” Even when there was no explicit blame-casting, the more competitive among the group had to work to hide their reactions at the play of others. Even the milder end of that spectrum shouldn’t happen in a hobby intended to be nothing but fun.

I also discovered this on Board Game Arena once the game received a digital implementation on that site. Players on that site often chain dozens or hundreds of games together, and many of them quickly become annoyed at sub-optimal play. I can handle random internet vitriol, but why would I willingly subject myself to it?

I am not isolated in this observation about the game. I have other friends who won’t play for identical reasons, and sporadic internet comments will echo the concern. Even if they aren’t in groups that will low-key shame them for poor play, they feel the weight of that poor play as it affects the others in the group.

This is all possibly still a group dynamic thing, granted. But if there’s a thesis in this section, it’s something like this: games that allow for this, and seem to stoke it, are not entirely exempt from blame.

Those who have uniformly enjoyed the game probably think I’m overstating this. But when I can play and love some of the supposedly “meanest” games in the hobby without issue, and The Crew seems to bring out this undesirable behavior in multiple groups, I have to start asking if it’s the game at fault.

Not to belabor the comparison to The Mind, but The Mind is essentially a blameless game. If you play a card a microsecond before you should have, there’s no rational reason you could have known. So there are never the sour feelings I get after many individual rounds of The Crew where it was my decision that inadvertently tanked the round, or another’s who clearly knows they messed up.

Other games skirt this amenably by having less zero-sum outcomes (the aofrementioned Hanabi doesn’t technically have a win condition), or separating individual performance to a degree, a la Letter Jam, in which you can “lose” but still have micro-wins around the table that assuage any hard feelings. By contrast, the Crew doesn’t provide a net to fall from in this regard, and simply assumes someone won’t mind being the weakest link at the table, which someone tautologically will be.

Me vs. The Masses

This won the Spiel de Jahres and is well-regarded, so there’s obviously a disconnect for me. Someone reading this is going to adore The Crew, and you’re not wrong. In fact, you’re in the majority.

I also enjoy trick-taker games and various cooperative games. I came into this one with genuine excitement.

Just in the last year, though, I’ve played trick-taking games that are more varied and exciting (Tournament at Avalon/Camelot), breezier twists on classic mechanics (Diamonds, Turn the Tide), and better hidden information and/or no-talking coop card games (Hanabi, Beyond Baker Street, Letter Jam, The Mind, The Game, etc.). And none of them, even a single time, have produced the sour taste in my mouth that The Crew has every time I’ve played it. So why would I play The Crew when all of these exist?

Consider this the minority opinion, then, to balance out the love the game is receiving (and undoubtedly will continue to receive). If you love The Crew, I wish you well with it. For my part, I’m headed back to The Mind (or even The Crew’s grandfather, The Game). Those games make me smile. This one…doesn’t.

For more content, or just to chat, find me on Twitter @BTDungeons or simply explore the site.