The Djinn of Al-Qadim

For full setting, campaign and character notes, please start from the beginning of the session report series.

When we left off, the party had recovered from a fight at the caravan (and Telchak’s death and resurrection), and had agreed to hunt some wyvern riders in exchange for travel assistance from the caravan’s leader, Fatima. Aiding them is the dwarven tracker, Jumanji Baccarat, and his Gorgon mount, Bullseye.

They spend the first part of the session learning about desert environs from Jumanji and planning their ambush of the wyverns. Jumanji is confident he can track and locate where they’re hiding out, as there are only so many suitable locations in the desert.

Dalia also attempts to persuade Todor – their new Hill Giant acquaintance – to accompany them. He carried himself well in the fight the previous evening, and would be a powerful ally. One failed persuasion roll later and Todor is sympathetic to their efforts, but cannot leave his young son to go on such a hunt.

They’ve also decided to fully mistrust Cassim, citing his former ties (which he admitted!) to the wyvern riders (that he helped the party fight!). Ah well; I made him a bit too roguish for trustworthiness, it seems.

The plan amounts to using the Hallucinatory Terrain sand available to them (from Fatima), along with remnants of the wagon that was destroyed in the previous night’s fight, to create the illusion of a small oasis with a broken-down wagon in it. Using this as a lure, they’ll hide as the wyvern riders investigate. The party also discusses various means of ensnaring the wyverns long enough to avoid them simply flying away.

Jumanji leads them into the desert, and they scope out various rocky areas that are suitable for making a camp. Jumanji surmises that they’ll want to be up atop these cliffs, since it’s more defensible. The group agrees to find the wyvern camp, then set the ambush near it, but not to try to climb up into the camp itself.

Jumanji’s instincts prove true, though it takes them nearly two full days to locate the camp. The illusion is created and the trap is set once they confirm that the wyverns are flying to and from this location.

There are three riders that come to investigate, and these are the only three the party have spied in the preceding day or so as they staked out the camp. One hops down and checks out the downed wagon.

They use this as a cue to attack, and the plan goes off quite effectively. They’re able to do considerable damage before the wyverns get a response. But respond they do, and in a single round of attacks, one of the wyverns nearly kills Atar. However, the overall tides remain in the favor of the party, and they leave one rider/wyvern combo alive and leave him with a warning, while another combo dies, and a third rider dies while his wyvern flees.

They consider this enough of a success to report back to Fatima, who agrees and thanks them.

Fatima reveals that she’s in possession of a large magic carpet that can take them to the location they seek. She would accompany them, as a “getaway driver” should they need it (though she doesn’t use that exact phrase).

Jumanji expresses interest in helping as well, but has another local job from one of the desert tribes, asking him to hunt and kill a two-headed Roc, a gargantuan bird. He asks for assistance with this, and in exchange he’d be delighted to help them in their quest in the deep desert.

The party declines, wanting to avoid unnecessary danger and only accepting what they consider to be necessary to fulfill their goals. Jumanji is understanding, and wishes them well.

Telchak’s player felt a little bit sick…enough that he didn’t want to risk making us sick, but not enough that he wanted to skip the session. He and I chatted and we were able to accommodate him. See the pictures below; the TV setup worked surprisingly well, and I had my webcam set up to mimic what he’d be seeing from his position at the table. With him linked into our session over Zoom, it was almost like having him at the table. 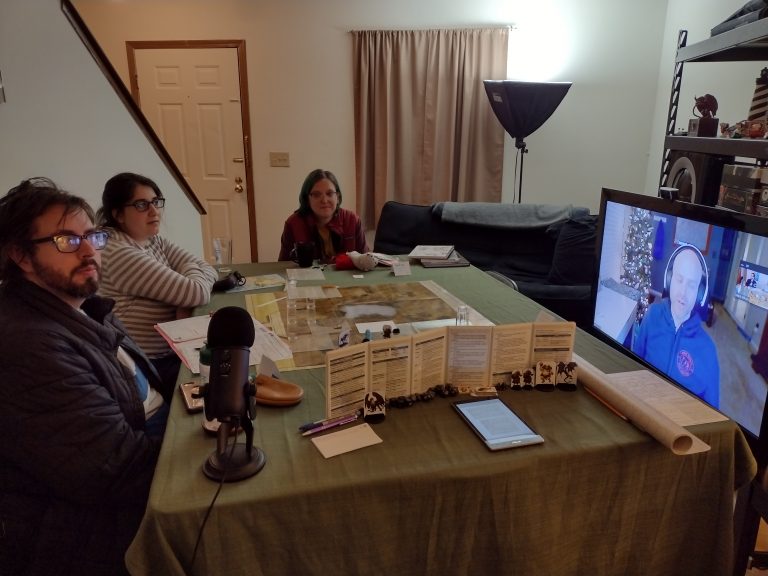 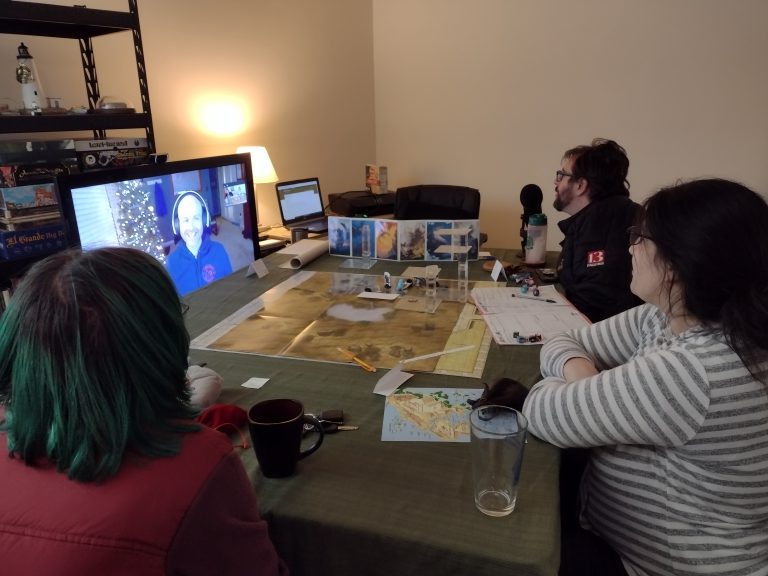 Not that that’s something I want to do terribly often, but it’s nice to have it as an option. Modern technology can be cool when creatively applied.

As for the session, there were other ways for them to get to where they’re going, but this was probably the quickest.

Jumanji offering aid in exchange for aid in the Roc hunt was something I wasn’t sure they’d accept. It’s fine that they didn’t, but I’m a little worried about how little they’re attempting to make long-term allies. This is not a campaign that will be completed successfully on their own. They’re going to need to form a coalition. I do hope to impart that to them more fully in the coming few sessions, but I don’t think that central idea has sunk in just yet.