Tournament at Avalon Board Game Review 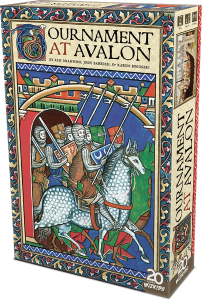 Trick-taking feels like it belongs in a museum to me. Sure, Chess and Go have an air of the ancient in ways that classic card games don’t, but I didn’t grow up playing Go. I grew up playing Euchre and Poker and Pinochle.

But now that I’m a “hobby gamer,” why would I ever want such an outmoded mechanic on the center stage?

Ignoring for a second that I still love a game of Euchre, trick-taking games tend to suffer from a bit of sameishness, don’t they? You figure out which card(s) trump which, in which situations, and then you either play what you have to on turns, or choose between a couple cards at key points. If I’m being fully honest with myself, Euchre maintains its appeal due to nostalgia and the fact that my family still plays. It’s great because of the people it brings me together with. The game is just a convenient backdrop, not the point itself.

There are several fine iterations of trick-taking in modern board games (or card games, more specifically). But the twists they present on classic formulas are often only a step or two removed from others we’ve seen many times before.

Tournament at Avalon is the first for me that breaks that trend. It does this by pulling absolutely no punches in trying to shake up the genre. It asks the question “What if we kept all the standard trick-taking stuff, but then blew it up, then twisted it, then blew it up again?”

Tournament at Avalon – The Premise

You’re at a jousting tournament in fabled Avalon, etc. etc. yadda yadda. It’s trick taking plus crazy powers. It then adds different crazy powers to interact with the first set of crazy powers, and layers them on top of special ability cards that modify smaller elements.

All of this sits on top of a trick-taking game, so the core of the game is immediately digestible. You’ll spend your time inverting the expected, though, which is the appeal.

I’m not sure I need to explain trick-taking, but the game does indeed have four suits of cards, each with numbers 1-15, and a wild suit, plus a handful of special ability cards that do things like flip whether or not highest or lowest will “win” the trick. In this case, winning is bad, because the cards are injury points that push you closer to death.

Each player will also have a powerful Protagonist ability. Protagonists are paired with Companion abilities that will unlock at a certain health threshold. These are your catchup mechanics (well, one of them, at least). Once you hit, say, 150 health (from an original 400), the ability will unlock, helping you cling to life.

After each round, other cards will be doled out to those with the lowest health to give them one-time or temporary abilities to stem the flow of blood. Lastly, Location cards can come into play via certain Protagonist special abilities or catch-up (“Godsend”) cards. Locations – you guessed it – offer more ways to alter the proceedings into something even more complex.

I’ve seen this compared to Cosmic Encounter with Cosmic’s bizarre, game-breaking species powers, and how it encourages team-ups and negotiations. Obviously the base mechanics are different, but it’s not a terrible comparison.

Like Cosmic, the reversals of fortune, betrayals, negotiations, team-ups and shenanigans are the point in Avalon.

The point is NOT the round-to-round tactical nuance of the game, which suffers due to all of the chaos. To put it another way: there is very little method in the madness, because the method is the madness.

Which isn’t to say strategy doesn’t exist (it certainly does), but it at least partially exists on the interpersonal level consisting of tactics like trying to convince the person next to you that that other guy over there is the one winning, not you.

The turn-to-turn card play matters, for clarity, especially at smaller player counts. And at any player count, when you play certain cards matters. Oftentimes, it’s not even about inflicting damage, but about holding back cards that will give you the best chance to avoid damage. The strategy is more about tip-toeing through a minefield than it is about hurling grenades at your opponents.

Sometimes, though, any plans you may have will get chucked out the window by the unexpected. In those cases, you’ll just be along for the ride.

Also for clarity, I differentiate between chaos and randomness in games. Not much is “random” in this game, except for the initial cards dealt to you in each round. You can even pick your starting protagonist and will have a choice of catch-up cards when you’re unfortunate enough to qualify for them. Almost everything that happens, then, is a result of a deliberate choice, not random chance.

Chaos can feel like randomness in practice, though, which is why I bring this up. From a design perspective, though, I do think there’s a difference, and I tend to prefer chaos in my games, whereas randomness is more hit or miss with me. For all its seeming unpredictability, chaos can be the result of a careful plan; randomness is capricious in every sense of the word.

In possibly my favorite session of this, one player was very far ahead of us, and we saw little chance to claw back.

The latter was given to me, with my blessing. I then proceeded to try to lose every single hand in the next round, to accumulate cards. At round’s end, we rotated them to the leader. He took ~250 damage in a single round of play (which was also the final round), a truly absurd number. It wasn’t quite enough to catch him (I was about 30 points back and another player was 10 points back), but it was a brutally tactical series of events that made that last round epic and harrowing, and it happened due to a coordinated effort between players.

This is the kind of interaction many games only dream of, the kind that marries the strategic, tactical and interpersonal together into a coherent whole.

So if you have multiple different types of powers, then multiple individual powers within each of those types, how do you figure out which trumps which and how they all interact with one another?

Confusingly, it turns out. At least on occasion.

To play devil’s advocate to the critique I’m about to make, most of the time a card’s effect is obvious, as is its interaction with other powers. However, you’ll be sent to the rulebook on at least a couple occasions per game, and probably much more than that early on. And since those occasions amount to weird circumstances, it’s not stuff that you’ll be able to easily memorize rules for. So my guess is that you’ll be in the rulebook just as much after a dozen plays.

Is this minor? Yeah. But it’s also a tiny bit disappointing, because I want to start the ball of chaos rolling downhill in this game, and have it never stop until the game’s over. Breaking up the experience with silly things like rules inquiries is antithetical to this joy.

Those who want their card games to be intensely strategic. Those who don’t like having to collaborate to pull a leader back to the pack. Also, in a technical sense, everything in this game is “take that,” which turns some off. But it’s so seamlessly baked into the premise and gameplay, that it frankly doesn’t feel as nasty as others that seem to want to create animosity at the table.

I like games that make me laugh. Seriously, what are we doing in this hobby if we’re not smiling stupidly at some absurdity on occasion?

This game makes me crack up frequently, regardless of whether or not I’m the one on the business end of a metaphoric lance in the tournament.

This is going to be a dangerous comparison, but there’s a little bit of Munchkin in this game. But only the good parts. It presents more interesting decisions and more varied possibilities. It looks better and plays more smoothly. And it plays in about half the time. Munchkin has made me laugh until I cried once or twice, but in between those moments have been multiple sessions that are joyless grinds. I have yet to have a dud session of Avalon, and can’t really imagine having one unless I’m the only person at the table who’s enamored with the premise.

So not only is this easily my favorite trick-taking game, it’s become one of my favorites, full stop. There are some marginal momentum-killing flaws mentioned earlier due to how complex the ability interactions can become, but these flaws are swept away in the overall experience.