Tsuro of the Seas Review 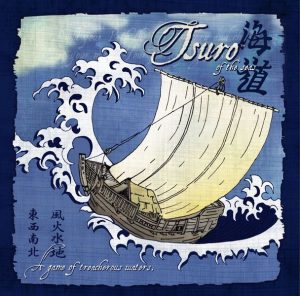 BGG Link: Tsuro of the Seas

Like its predecessor, Tsuro, you start on the edge of a board and place tiles with looping patterns. Your token follows the patterns over the board, trying to be the last surviving token/player. Being knocked out in Tsuro could mean looping off the edge of the board or running into another player’s token.

In Tsuro of the Seas, the board is expanded but a new menace roams around the board in the form of dragons. Their movement is abstracted down to random dice rolls, making many decisions tense games of “Chicken” as you hope to skirt by one of them.

The board, pieces and art are lovely. This game, and its predecessor, likely owe some of its success to its unique, intricate artwork and style.

Let’s first mention something that I don’t think is always obvious: this game makes Tsuro entirely redundant. You can play Tsuro on it, even at its original board size, or on the expanded “…of the Seas” board. Or you can play with the new rules that are unique to “…of the Seas.” Unless the original’s artwork is something you absolutely need, this is the version to own, since it can act as multiple games in one.

The Journey is the Destination

If you’re trying to “win” Tsuro in a tactical sense, you’re probably doing it wrong. It’s too random. The point is to laugh at the changes of fortune, or the excitement of a dragon unexpectedly moving away from you and into an opponent. The point is to watch your token loop around in maze-like pathways, unsure of whether or not it’s the best long-term strategy but enjoying it turn by turn.

Someone will be eliminated first and will have to wait a bit. I don’t always like player elimination, but don’t mind it when the game is short enough, which it is here. I will say that at the highest player counts might you encounter protracted downtime if you’re the first to be eliminated, so I prefer to keep it to 5-6 players.

Veterans of the Seas Expansion

The expansion adds new tile types that allow you kill the dragons (with cannon tiles) and adds some shenanigans in the form of a Tidal Wave mechanic and whirlpool/portal tiles. It’s all cool, with one exception…

Fans of games with strategy will want to steer clear. It doesn’t pretend to be highly strategic, and simply won’t engage those types of players. The strategy in this game is nebulous at best, and often nonexistent. It’s a pleasant diversion, but you’re often at the mercy of your tiles or dice rolls.

Tsuro of the Seas – Conclusions

Tsuro is a chill overall experience with bursts of fun tension. If you need a visually interesting filler that works well with about 3-7 people (technically it holds 8) that won’t tax your brain, this is as good as many and better than most.