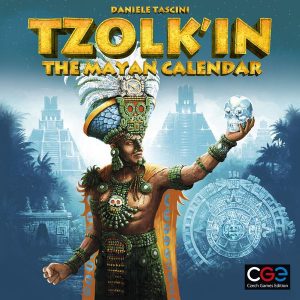 This review assumes basic knowledge of the game’s mechanics. If you need a rules explanation, here’s an excellent tutorial video.

Play and review enough games, and eventually you begin to approach games with certain assumptions. I know my own tastes by this point, despite being open to new gaming experiences. If a game I know nothing about starts at 0,0 on a hypothetical X/Y axis, with one axis representing my initial interest and the other representing my eventual enjoyment, most games these days aren’t starting at 0 on the interest scale.

If not accounted for, this could be bad for reviewing purposes, since it implies a bias. However, an awareness of one’s biases allows you to control for them. A game I think is pretty good but not great, in a genre I’m less inclined to like, is likely really good for fans of that style of game. And so on.

Tzolk’in: The Mayan Calendar started at about a -3 in interest, if I’m being honest. Four different tech trees AND three different religion tracks in addition to the action on the main board, with all sorts of fiddly rules and iconography soup. Just getting through the rules explanation was an exercise in discipline for me.

Mathy Euro engine-builder optimization puzzles, for me, tend to lack the exciting extremes of some other genres. The puzzles themselves are almost invariably clever, but can be lonely experiences. So, are the merits of Tzolk’in enough to win me over from that initial bias? Short answer: yes. Let’s explore why.

It’s All About the Gears

The most obvious reason why is hard to miss. The interlocking gear structure – or rondel, as it’s sometimes being called these days – is the big innovation here. It single handedly pulls the game out of the doldrums of what could have been a more soulless worker placement engine builder.

The risk/reward of letting a worker ride a gear is novel and exciting, as is the tactical puzzle of when, where, and how many workers to place or pull on your turn. It’s frustrating placing or pulling only a single worker for multiple turns, but can absolutely happen if you don’t plan carefully.

The gears are also a visual and tactile thrill. Despite being wildly unique, the whole structure is so central to the game that it never feels like an unnecessary amount of effort was put into making the gears and board so magnificent.

Focus in Board Games

The other big reason the game shines for me is that despite the almost comical number of side hustles you can be running to the side of the main gear-space, the action never actually leaves those gears.

On your turn, you are always only pulling or placing workers. Their actions grant you the tech/religion tree bonuses and other goodies like buildings and their more massive endgame point generators, monuments. But the action never leaves the gears.

This is vital, because it creates and maintains tension between players. The gears becomes overpopulated in a hurry, leaving you with excruciating decisions that are the hallmark of any good worker placement games.

I can’t tell you how many worker placement games only hint at such tension, but instead offer too much freedom to players. I could imagine a version of this game where, for example, I’m on two religion tracks and one tech track, while player B is on different tracks altogether. And each track is controlled by different action spaces or cards, so we’re playing our individual games alone. Or we all have a personal player board with additional available actions, to give us a safety net in case our first option is taken.

In Tzolk’in, though, we may be on different tech tracks, but we still need to occupy the same gear or two to manipulate any of them, or occupy another gear to reap additional benefits of our advancement. As the gears turn each round, this becomes a calculated dance between combatants, and slowly becomes more cramped, not less.

Tzolk’in does not hold your hand in the manner of those hypothetical games I compared it to (which frankly aren’t so hypothetical). It asks you to make tough decisions and to occasionally sacrifice your plans to account for what’s available to you.

There’s a brilliance here, because while each gear has a bunch of different possible actions, there are only a limited number of decisions for you to make in a given round.

So it’s not that you have to choose two or three from among 50 different options, but rather choose two or three from among five or six (gears, or the first player slot). Those five or six allow for dozens of different paths and synergies. So the options are as myriad as the densest Euro, but the game bottlenecks how you access them through the mechanics in a way that’s rare among Tzolk’in’s heavier Euro peers.

I sometimes look at complex games and silently hold the opinion that they would likely be just as fun if they had 20% of the overhead shaved off.

Sometimes this is with components, mechanics, or individual rules within the broader mechanics. I’m surprised I don’t feel that way here, and I suspect it’s because the giant gear itself sort of sets the theme of the game to be one of formidable, interlocking complexity.

It’s like looking into the inner workings of a watch and marveling at the precision and intricacy…but then playing a game inside its interlocking parts. If this much of a production went into a product, and this level of design intricacy, I think I’d be disappointed with less than an absurd number of point options.

So this may be a rare time where I not only tolerate complexity for complexity’s sake, but think it adds to the theme that the game evokes.

Which isn’t to say everything’s perfect. The game’s more colloquial theme, that of Mayan civilization, is never paid more than lip service.

Go fishing for corn? Sure. Pay for a building with your excess of corn, instead of the resources needed to actually build it? Why not. Harvest crystal skulls to place in temples to please the gods? Whatever. It’s all just resources and action spaces. Pretend like it all makes sense and just take your victory points like good little gamer, yeah?

Fortunately, it’s obvious from the start that you’re not playing this for thematic integration, because that is not a draw.

And while, yes, I’m giving a pass to arbitrary complexity this time, the arbitrary stuff is certainly here. You’ll get six points on one track at a particular turn of the clock, and two points for the same track on another turn. Why? Because the designers said so. I’ll spare you other examples, but it does occasionally increase the overhead of elements you have to remember, but without adding anything that I’d consider vital to the experience.

There was one comment I saw on this game that gave me pause. It was a brief writeup on strategy, and, roughly, what actions you should take in each quarter of the game in order to reliably finish with triple digit points. It was eerily specific, and included strategic options to avoid as well.

It gave me pause because I want this to be a game that rewards reacting to the situations the game and other players give you, not one that rewards rote memorization of pre-designed strategies intended to automate high-level play. This is what often kills the more mathy Euros for me, so I silently despaired at its presence in Tzolk’in.

I suspect – and certainly hope – that this particular comment was overly generalized and would indeed be subject to the circumstances of any particular game. However, not having ascended to such levels of strategic mastery, I can only hope I’m right in that assumption.

If it turns out, however, that this is a game that rewards the player with the most detailed mental (or literal) spreadsheet, not the one who more organically responds to the strategic dynamics of the moment, it will drop a tier in my estimation.

Games touted as innovative sometimes end up being gimmicks without the requisite depth to sustain prolonged interest, or they don’t actually iterate meaningfully on established ideas, but rather poke around the edges of the mechanics for incremental changes, at best.

Tzolk’in is innovative, and in a way that provides a wholly different flavor to worker placement, a genre replete with pseudo-innovations. Its depth should reward numerous plays, but it remains accessible enough and tense enough that it’s not just the interlocking game systems that will be a continual draw. The other players around the table will provide the fun as well, as you bounce off each other while scrambling along the gears and experimenting with strategies to better navigate the literal clockwork of the game’s insides.