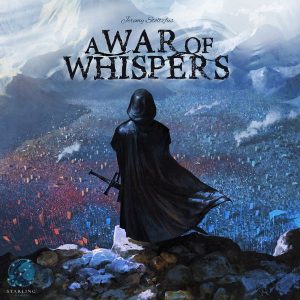 There’s a word I love using in reference to board games: oblique. “Neither parallel nor at a right angle to a specified or implied line; slanting.”

My love of it is tied to tactics and strategy. There are games, including many great ones, where the strategy is mostly linear. Most engine builders are like this; tons of options at any given point, but a more or less linear progression along one or more point tracks.

I’m about to shower praise on non-linear games, but don’t mistake that for criticism of more linear ones. Both can be terrible or excellent depending on execution. I draw the line between the two to make a comparison that I think is useful in a review context. Oblique strategies imply the unexpected and nebulous, and usually the interpersonal. I can appreciate a good engine builder, but find myself drawn to games that thwart attempts to codify strategic best practices.

A War of Whispers (WoW) is all oblique lines in the sand. Not only is nothing linear, but the lines you drew in one round might be washed away the next, forcing you into a new set of goals.

The setting is a loose, legally distinct Game of Thrones-style world, but rather than play the titular houses vying for the throne, you’re the spy organization behind them betting on the winner(s). By game’s end, whoever’s allegiances are most closely aligned with the dominant factions on the board will win. You can change allegiances, albeit at the penalty of having to make that change public to the table, giving you just a bit less leverage in the form of mystery. The rest of the game is the nuts and bolts, which sees you assigning your spies to spaces on the various factions’ councils, which afford you certain actions related to troop placement, movement and conquest on the board. It’s area control, but one step removed, since no faction “belongs” to a particular player.

The beauty here is in the oblique. You’d think, for example, that you’d want to load up on actions that affect whatever faction you’re most closely allied with. Not necessarily.

You see, it’s likely that at least one other person at the table wants them to do well, so you’ll be monitoring the actions of your opponents. If they seem to serve your ends, you can safely assign your resources elsewhere. Uneasy alliances will form between players, with whom you’re ultimately competing, so there’s a dance that becomes tough to navigate.

Your opponents will be doing the same, of course, which begs the question of how strongly and how soon you want to show your hand.

Do you focus all your attention on one ally, and plan to swap a different, neglected allegiance to whoever is doing well later in the game? Or do you try to establish a couple as dominant, forcing others into switching allegiances (which also acts as a negative toward tiebreaking purposes at the end)? Opportunities abound, but none of them are assured of success.

Ability cards you’ll collect also offer a mildly useful power, or a potentially amazing power if paired with an ability card from some other faction. Collecting them will cost you maneuvering power elsewhere, and that’s an advantage your opponents may fight to keep through the entire game. But it also gives you an ace up your sleeve that may tilt the scales unexpectedly at the right moment. Whether or not such a strategy will pay off or fizzle is highly situational.

You can also use your influence to add a stronghold to an ally, which will convert to more VPs at the end, but at the expense of an action. You’re also tipping your hand overtly at that point, though you may not care. The risk/reward and uncertainty is present in every decision, heightening the tension.

From a less philosophical perspective, the game plays in about an hour and is easy to teach and absorb. Apparently the designers wanted to distill a Game of Thrones experience down to a manageable timeframe, and I believe they’ve done so.

Negatives in War of Whispers

The board itself is one of the negatives. It’s a dark, soupy miasma that is tough to scan quickly for relevant details, which invariably blend into the scenery or are too small and become covered by troops. The armies themselves are just cubes; I do not need plastic miniatures to enjoy myself, so I have no quibbles here, but others who love pushing opulent ephemera around the board may feel as though there was a missed opportunity here.

The other negative I can point to is more potentially troubling. Because you can swap four of your five allegiance tokens, it’s very possible for everyone to end up with similar allegiances by game’s end, and for some to have identical allegiances.

This begs the question of whether your early moves are indeed to gain an advantage, or aren’t worthwhile until you suss out who you should be swapping to. Endgame ties are also more likely than in other games within the area control genre because of this. Tiebreaker rules can be exciting, but when the scoring structure seems destined to make frequent use of them, it risks devaluing the action that takes place before final scoring.

Here, I’ll unfortunately have to offer a shrug. This hasn’t been a problem in my games, but it’s been close to one a couple times, and I’ve both seen the criticism elsewhere in comments and reviews, and have talked to a couple friends who experienced it firsthand. Basically, if enough players start with similar allegiances, or end up with similar or identical allegiances soon enough, the game can feel very strange, and not in a good way.

I don’t think reviews need to resolve all possible questions, so while I think I have enough to say on WoW to justify a review, the jury’s still out for me on this particular point. Clearly, it can happen to the extent that it’s an issue for some, but even those same friends who had the stilted session admit that other sessions have been great fun.

So it hasn’t sullied my overall enjoyment, but I do wonder if it wasn’t a mistake on the designer’s part to allow all but one allegiance to be changed. I also wonder what repeated plays would do to my enjoyment. As such, I’m glad this crosses my path a handful of times per year, but I won’t be owning it.

In terms of audience, I’m not sure if conflict-averse gamers will run from this or find it palatable. Due to the nature of the game, conflict is omnipresent but never direct in the way we normally think about it. So it may be an interesting compromise for those who shy away from conflict but still have a thirst for gritty tactics.

A War of Whispers – Conclusions

There are precious few games that, for me, deliver the emotional satisfaction of longer, more complicated games in a shorter, tighter experience, so we should point them out when they arrive.

In a hobby often occupied with what we can add to an experience in the form of mechanics, expansions or materials, it’s at least occasionally better to consider what can be removed from a game while retaining the core appeal. WoW is not quite the sweeping epic of the longer games whose essence it distills, but it retains enough of the core tension to be worthy.

In this praise, I’m also not glossing over the flaws I mentioned, but I think that some number of faults can be more easily forgiven in a game that plays so quickly. What might be game-killing in a two- or three-hour game is irksome but palatable in a shorter game that still has a lot to offer in terms of intrigue and tactical nuance.