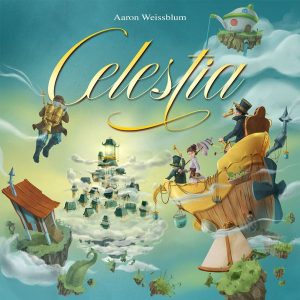 I’m often wary of games that seem to bolt a new theme onto a well-known mechanical premise. Celestia has a pseudo-steampunk vibe and you’re riding an airship. And hey, look at this awesome, three-dimensional ship we made for you! The propeller spins too, even though it doesn’t need to. Aren’t you having fun already?!

Meanwhile, having seen one too many glossy Kickstarters on my table as a result of my or my friends’ impulsiveness, only to never see 80% of them again because they’re pretty but vacuous, my eyebrow is decidedly raised in mild skepticism.

No, I don’t give a shit if the propeller spins (a fact I bring up for a reason; it’s mentioned in a LOT of reviews for this game, even otherwise well-considered ones). I’m relieved, then, to say that Celestia works like clockwork, as smoothly as the propeller it’s attempting to distract us with.

Celestia is a charming game of pressing your luck. In it, your primary decision is whether or not to stay on the airship, while everyone else is making the same decision. Upon each new stop, you rotate who the captain of the ship is, and they have to navigate the treacherous skies (randomly rolled on dice) by playing matching cards from their hand.

Occasionally, special ability cards circumvent this. If they can’t successfully thwart the hazards, the ship crashes, and only those who decided to hop off previously reap rewards for that round. Everything begins anew with everyone drawing a new card, and you play until someone reaches 50 points. Naturally, the longer you manage to stay alive on the ship, the more potential points you’ll receive, up to and including 25 in the most successful rounds (and far less on most of them). 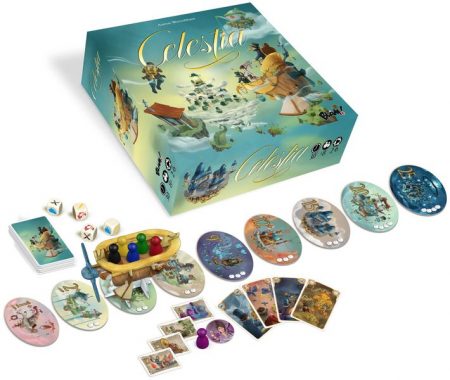 Celestia’s strength is that it doesn’t lose the core tension of press your luck, and the mechanics it bolts onto the central decision serve to deepen and enhance the thought process.

There will be rounds where you want to deliberately push off an opponent with a small hand of cards so that you can make it further down the point track. If you’re lucky, you’ll get a card that can do just that. That same player, knowing they’re the weak link as captain until they resupply their cards, might actually want to deliberately crash the ship in order to prevent their opponents from raking in more points. So they’ll decide to stay on the ship indefinitely instead of hopping off on one of the early islands for a few points.

This also introduces the option to bluff about your hand in the form of feigning confidence or simply staying on board, or double bluff with feigned nervousness at certain dice rolls in order to convince your opponents to end their journey, leaving you to ride the clouds alone.

The occasional special ability cards also act as excellent wild cards that subvert much of the above, allowing you to skirt the rules for a turn at crucial points.

This is great stuff, because it’s decisions like those that will provide some much-needed strategy and intrigue amidst the admittedly luck-driven dice rolling and card draws. And these more nuanced moments also don’t prevent the game from producing some exhilarating highs as you skate through multiple tricky islands or fly too close to the sun and, like Icarus, come crashing down in hilarious infamy. I also can’t think of another pure press your luck game that legitimately lets me bluff and double bluff to gain an advantage, so there’s a uniqueness here that isn’t always obvious when you simply read the summary.

The game ends when someone hits 50 points, and while you can sort of guess when someone is getting close, points are hidden and points on the earlier islands are somewhat variable based on card draw.

As a result, as the game’s end nears you’ll see players’ risk tolerance suddenly increase, which adds an excellent amount of late-game drama to the proceedings.

Celestia will occasionally irk some when you have multiple crashes in a row, leading to some sessions where the smart play seems to be stopping at the early islands and slowly working toward victory. This frustration is real, and the pacing can suffer some as a result. However, all it takes is a great round of one or two players making it to a 20-25 point island for the game to take on an entirely new dynamic.

The game self-balances in the form of hand size. If you continually stay on board and go far, your hand will be depleted more quickly than others and you’ll be at a disadvantage on subsequent rounds. That said, between the card draws to your hand, dice rolls for weather hazards, and card draws on some islands for points, there’s a lot of luck here. I talked up the strategic side earlier, but luck is omnipresent and significant in most contests. Adjust your interest accordingly.

On play count, I haven’t played with less than four, and I’m not sure I’d want to. Celestia manages a party-game atmosphere with its ability to generate table talk and the occasional capriciousness of the dice. These elements need a decent-sized group to fully enjoy.

Overall, I’m a big fan because there’s more here than in many press your luck games, but without ballooning the length onerously, and all of it seems designed to magnify the core mechanic. It won’t win over gamers who don’t enjoy the randomness, but will win over those who can laugh at that chaos while scheming within it.

And the propeller spins, if that’s your thing.