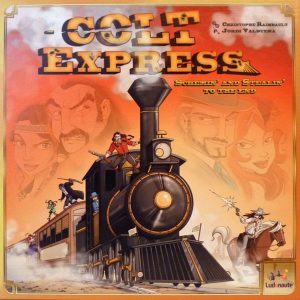 In Colt Express, you’re a train robber trying to get the most loot. You perform actions via a series of action cards that you play in sequence, along with all other players. The round then unfolds card by card, but rarely as you anticipate, since opponent actions will affect your ability sequence, often in hilarious fashion. This is an example of “programmed” actions that you can’t affect once played, like winding up a toy car and watching it go, but with 1-5 other cars on the track with you. Your first action of the round is usually secure, but by round’s end you’re just hoping for something that isn’t entirely terrible.

Granted, winning the Spiel des Jahres (one of board gaming’s highest honors) isn’t a guarantee of success, but it’s also far from the worst predictor. It’s flanked in the winner’s circle by games that have, to my eye, far outpaced its popularity, such as Codenames, Azul, Camel Up and Hanabi. So what gives?

Colt Express is three-dimensional, goofy fun. The train itself, and moving your meeples along it, provides the sort of tactile thrill that board games are so great at delivering. The mechanics are simple but allow for a lot of unexpected shenanigans. The premise and theme is immediately recognizable by casual and hardcore gamers alike. Given that any board game is an abstraction of its theme, Colt genuinely creates the feeling of a train heist. And the individual player abilities and semi-hidden, programmed action sequences give regular gamers some meat to chew on, even while kids and new gamers will simply enjoy the visceral thrill of seeing the action unfold.

I could list negatives, and they include the fact that, ultimately, not much thinking is involved. This is a fun diversion, not terribly strategic. I mean, you could think a bunch. But it usually won’t amount to much in the face of card draws. Often, who you punch or shoot, or what loot you should take, is also a de facto decision involving no real options. These will limit replayability for some, even though they shouldn’t blunt the initial fun of your first handful of plays.

Perhaps it’s unfair to compare it to adjacent Spiel winners. Or maybe that’s the key. Because if I compare it to Hanabi, for example, a simpler, more elegant game but ultimately a more limited one, I think it comes out looking fine. Colt immediately followed Camel Up, though, and I think there are some comparisons to be made there in tone and audience, and if I’m being honest with myself, I smile just a bit more often when playing Camel Up. It also immediately preceded Codenames, which was lightning in a bottle, and has been a force of nature in the hobby in the years since. So there are some of the games it’s competing with in terms of appeal and audience (though not in mechanics, granted). And let’s be honest: there are lots more in that same conceptual space in which the Spiel resides, that of having relatively universal appeal while still being able to appeal to long-time gamers. It’s the confluence of party games, family games and so-called gamer games. Many gamers only need a certain number of those in their collection. Is Colt the best of them, then? No.

Is it still good, though? Yes. It’s well-regarded on Board Game Geek, so maybe I just live in a weird gaming pocket where this is the game no one decided to buy, and it flew under my radar for years and is still one that basically none of my many gamer friends have played. Based on that admittedly anecdotal experience, though, I think it deserves more love, as I certainly enjoy its whimsical tone and compelling, always-surprising structure.