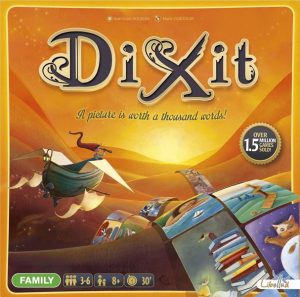 Dixit is a simple card game wherein the cards are largely abstract artwork. One player picks a card from their hand and comes up with a phrase to describe it, then plays it face down. Every other player picks a card from their hand that they believe matches the word/phrase most closely. Then the cards are shuffled and turned over, and players try to guess which is the “original” that matches the phrase the current clue-giver said.

And that’s it. The challenge comes with scoring, wherein the phrase-maker gets no points if either everyone or no one guesses their card. Therefore, they have to sort of describe their card, but not too literally. The challenge is in towing that middle line consistently.

The components pretty much ARE the game here, and the artwork is lovely and evocative, and the cards are pleasantly large, to the point that “Dixit-sized cards” is now a common phrase in the hobby.

It’s impossible to talk about the artwork without talking about the expansions, which are just more cards. Each set is, I believe, 84 unique cards. While the series has gone back to the same artists for multiple sets of cards occasionally, usually each expansion is in its own unique style and is done by a single artist.

I won’t parse each expansion to say which I like best and least. But everyone will find a style that inspires them the most, so I encourage you to explore the various expansion sets.

The other good news is, the expansion cards change nothing about the core game. They just add delightful new artwork to muse on.

Delight of the Approximate Unknown

The central conceit of Dixit is a beautiful one, because it’s impossible to master. How specific can I be when describing a card? The answer will depend on the card. And the group. And what cards they have in their hand. And how much you all know about each other. Or the ages of the group members.

I’ve played this with hardcore gamers, and it has flummoxed them (and me). I’ve also played with my niece and nephew (9 and 11-years-old, respectively, as I write this) and it elicited the same looks of amused but concerned concentration, as they tried to come up with the perfect clue for their card or discern another’s phrase. There’s literally no advantage for a seasoned gamer, and yet you always have a lot to think about when you’re staring at a hand of cards, and your decision can and will affect your success in the game. It’s a beautiful equalizing mechanic that makes this one of the more universal games on the market.

Dixit is a game I like even more for a somewhat weird reason: the cards have alternate applications. I’ve heard that the playtesting for Mysterium used Dixit cards in its early iterations. True or not, it’s certainly possible.

Similar to the Mysterium musing, I had an idea for a game and developed a prototype for it using a bunch of Dixit cards. It’s fun, and I’d have been unable to make it without Dixit.

So the artwork makes the cards more modular than those in other games, which allows for creative applications of them in other games and settings.

The conceit, while elegant, is limited. There’s a reason a bunch of designers have tried to iterate on Dixit, and it’s because while there’s infinite variation within its structure, it’ll always be the same basic structure. So there are gamers who will tire of it before long. That said, I truly hope this game isn’t despised by anyone, because I can’t imagine looking at great art and coming up with goofy phrases is anything less than pleasant at worst.

This is probably my #1 recommendation for a family game, since it promotes and rewards creativity and levels the intellectual playing field through its clever and elegant mechanics and scoring. I keep it as a filler among my gamer friends, and enjoy finding creative uses for the cards outside the game. Some gamers will graduate from its admittedly simple premise, but as a lovely introduction to its style of game, I consider it a low-key standard bearer of the modern hobby along with a handful of others.