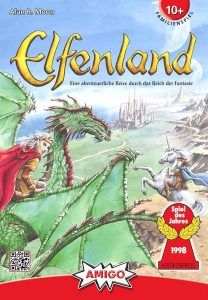 Elfenland is an odd duck; it’s Alan Moon’s pre-Ticket to Ride masterpiece, and it won the friggin’ Spiel des Jahres! So why had I never heard of it until the coronavirus forced me to consider only the games available on Board Game Arena, and exactly one friend (among dozens of hardcore board gaming friends I have) knew even 50% of the rules to be able to guide us shakily through our first play?

I am not a historian of the hobby, so I don’t know the full answer. But its pedigree made the game seem worth my time to try out.

You can see the DNA of Ticket to Ride (TTR) all over this game, so that will be the frequent comparison. On the surface, they’re both route-building games. Here you’re drafting tiles that correspond to travel methods, and are dealt a static number of cards that dictate which travel methods you can use most efficiently.

The board is mostly wiped after each round so that you can begin anew from wherever you ended the previous round, all while trying to plan an efficient route to get the most…uh…elf pillars? Cheese logs? I’m sure the rulebook says what we’re doing. For as much as I’ve played by this point, I should really know. But I’m choosing to stay ignorant. It’s more fun that way. I mean, really, you’re elves prancing about on elf-cycles and unicorns to collect cylinders on a fantasy map. Nothing about the theme is meant to be taken seriously.

In any case, paying for travel in card-currency to chain together the most efficient and lengthy routes could be a description for either Elfenland or TTR. There are differences, which we’ll discuss, but their ties are strong.

Back to the gameplay. Given your limited movements each round, your route has to be created with your cards in mind. While in theory you could place tiles to confound your opponents – and in practice you absolutely will be trying to use their tiles here and there – opponent tile usage usually ends up being serendipitous rather than planned.

You do have a blockade tile that exists explicitly to slow down opponents. This seems like a potentially nasty “take that” element in an otherwise benign journey for your elves, but I understand its inclusion as a way to slow down whoever’s winning.

I think here we see where old-school games and Euros started to diverge. Take another from the 90s, El Grande: a Euro, certainly, but in it, preventing a runaway leader is the players’ responsibility, not the game’s. These days, we often expect a catch-up mechanic and/or solutions to runaway leaders in most Euros, and they often come in softer forms like power bonuses or VPs. Moon was toiling away at an early Euro as we might think of it today, and realized the problem of a runaway leader, so he inserted an unashamedly old-school solution, basically letting the players know that they had to figure things out with it if someone raced ahead.

It works, but it strikes me as a sign of its age, and somewhat inelegant. But it can also be fun to be a bit of a jerk.

A 2P game can make this a bit more cutthroat, as is often the case. Whereas placing your tiles to annoy an opponent in a larger game likely just ensures mutual destruction, limiting your 2P opponent’s cheese logs is just as important as gaining them yourself. I’m not sure it’s any more or less tactical, just potentially meaner.

Elfenland is also less forgiving than TTR, the latter of which mirrors the tone of many modern Euros. In TTR, even when blocked, there’s nearly always a next best thing or the promise of a fortuitous card draw. In Elfenland, you can have a brutal round with very little to assuage the sting.

And while the aforementioned blocker tiles are great for stifling a leader, there’s no explicit way to catch-up. The silver lining is that since the board is wiped of tiles each round, hope springs eternal that you can nab seven or even eight cheese logs in a round with a magical string of cards. But while there isn’t a runaway leader issue, there may occasionally be a “fall-behind loser” problem.

So it shares this with El Grande (which I used as an example for this very reason): it’s easy to pull the leader back to the pack, but comparatively more difficult to rejoin the pack if you’ve fallen behind early. Not impossible in either case, mind you, but noticeable enough to include in a review. Elfenland is short enough that this should never be a protracted issue, but it’s occasionally there.

So here’s where I take those rough edges and tell you that I actually kind of love them. Make no mistake, despite being a different game, Elfenland feels like the rough draft of Ticket to Ride in many ways; the elegance of the latter puts the former to shame, and makes it a much clearer choice for a mass Euro audience. But I also kind of like Elfenland better because of its warts.

I’ll also clarify that I think some subsequent TTR games iterate on the original in ways that make them superior to both TTR and Elfenland (looking especially at Nordic Countries and UK/PA). Each has something slightly different to recommend it, though.

There remains a charm to Elfenland that’s a bit hard to describe. Why does an objectively silly game about elves feel like there’s some weighty, visceral importance to its proceedings? Which feeling is correct: when I work through numerous potential scenarios to plan the optimal route between my drafts, cards, and likely actions of other players and feel quite strategic, or when I feel buffeted by randomness beyond my control or the vitriol of my fellow players?

I suspect there’s a bit of TTR-induced Uncanny Valley here as well, which is intriguing to me, and likely will be to many gamers. I’m looking at something that hints at the depth of a good Euro but has me riding wild pigs with my boot token. It’s something that almost feels like an elegant Euro I recognize, but also lets me smash another elf in the face at least once per game. It’s not just the theme that’s goofy, it’s the combination of tonal elements, the way you can tell all the puzzle pieces are there, but they don’t quite fit together.

It’s something just a little bit different than anything else I’ve played, TTR included, and I appreciate it for that. I don’t want to play Elfenland a ton, and won’t say that it’s as good in today’s hobby as it must have been in 1998, but I am quite certain I’ll enjoy revisiting its quirky lands once in a while.