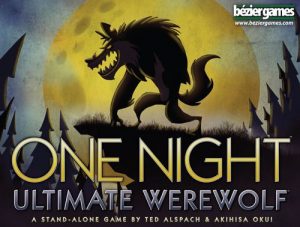 There are two teams: Villager and Werewolves, plus a couple ancillary roles that may have their own agenda. The werewolves want to survive, the villagers want to kills the wolves. You receive a secret role, all close your eyes, a narrator walks you through a handful of abilities and shenanigans to give some players a bit of information, then you “wake up” and begin the deducing and accusing, hoping your team can successfully bluff or deduce their way to offing the correct person.

One Night Ultimate Werewolf (ONUW) is a social deduction game that plays very quickly. Anyone familiar with other games in the genre will recognize it.

This almost counts as a microgame in terms of its table footprint, so there’s not much to talk about here. The role cards and chips are thick and well-made.

The Crowded World of Social Deduction

ONUW wasn’t the first of its kind, and certainly isn’t the last. The genre has exploded into permutations of the originals in the genre like Mafia and Werewolf. Those games took place over multiple “nights,” or rounds in the game. ONUW distills those experiences down to a single chaotic night.

There are a lot of other entrants, though, so separating oneself in a crowded games market is tough. I’m going to make the case that ONUW does this, but plenty of others provide similar experiences with different themes or slightly altered mechanics.

There is a balance in social deduction games that I think often gets lost. It’s a balance between chaos and knowledge.

You see, lots of games in this genre get played half-seriously over drinks by people not thinking too hard about it, or in large groups where the sheer number of voices can make things too confusing to thoroughly deduce. So if a game is only chaotic mechanically, it feels the same to those distracted players as a game that has a more delicate balance between what you can legitimately deduce and what you’re just guessing randomly at. It allows for lazy design that will still manage to be fun for fans of these types of games.

But so many of those games, which sacrifice deduction for abject chaos, will never reach what I think is the height of the genre.

There’s a delicious tension when you know some things, but not everything, and can deduce maybe one other thing and eliminate another possibility, but are still torn between a couple possible actions.

Similarly, when you know just enough that you can manipulate the table to your purposes, but without being entirely certain of success, it’s a great feeling. This tension captures the random chaos of nearly any social deduction game, but with an added depth that really does start to include a lot of nuanced interpersonal decisions.

Even modern stalwarts of the genre, including Secret Hitler and the Resistance games, to me edge toward too little information, and thus too much chaos.

I have frequently felt duped by a clever adversary in ONUW. I’ve of course lost in Resistance and Hitler, but almost inevitably because I simply don’t have enough information and am not sure how I could have obtained it. There’s information in those games, but it’s all masked by enough layers of uncertainty that deductions are approximate, at best. More often, you just sort of pick someone to trust and go down with the ship if you’re wrong.

It can be good fun, but it lacks something. Conversely, Mafia (which is basically the same as original, multi-night Werewolf) is one that leans toward too much information and too little chaos, because there’s only so much information to gather. So it becomes at best a coin flip and sometimes the villagers simply figure everything out and steamroll the game.

ONUW exists somewhere in the middle, and to me balances the two better than others I’ve played. You will almost always know something, but never everything. Or if you do know everything, it will be because of a fortuitous role and some brilliant deducing, which the game rewards.

Now, there’s a counter-argument to be made: what if you’re a Villager, and know nothing? And it’s a good rebuttal. My response is that the short play time makes this less problematic. You can decide whom to believe, and have an imperfect, chaotic, but likely still fun round, then reshuffle and play two more times in the time it would take you to play Resistance or Hitler once, and play yet another three or four times in the span of the longest games in the genre.

Whereas sometimes in Resistance, for example, I am mistrusted randomly, don’t have enough info to plead my case believably, and sit for a half hour watching the game play out.

It’s not perfect. Occasionally you’ll be the Villager. Which is fine, but won’t produce the most fun rounds for you. Some players don’t like needing a narrator, but I actually enjoy the role (I think I do a better job than the app, and you can still play even while narrating, unlike Mafia and original Werewolf).

Lastly, during play, moving role cards or looking at roles silently can also be a physical challenge in many environments, and if you’re heard moving them, your role may be revealed.

Most of my plays are with the base game, but I’ve had a number with the expansion.

Daybreak will give you lots of new stuff to consider. I’m personally not a huge fan of it because it tips the balance of the game toward too much chaos, to use my earlier argument. With too many possible powers and roles, or inversions or twists on them, it no longer presents a human puzzle that you might be able to crack, but one where you’re hoping to be able to understand anything at all and use it toward your advantage.

But for those who revel in the random uncertainty of these games, there’s certainly more of it in Daybreak, packed into the same quick timeframe. I’d encourage you to check it out if you like ONUW, though, simply because you may not have the same reaction as me, and for you it may be more of a good thing.

Social deduction is not for every gamer type to begin with, so let’s start there.

Those who also prefer to sink into longer-term strategy will also not have enough here. There can be a ton of social maneuvering and deducing that happens in ONUW’s 10-minute period, so it’s not light on cognitive engagement. But it’s not for those who are trying to slowly sow confusion or doubt into their opponents.

Give me three plays of this over one 30-minute social deduction game. Hell, give me 9-10 plays of this over one massive game, of which there are a couple in the genre. For clarity, plenty of other social deduction games (including those I mentioned) have something to recommend them, so I don’t want to be too disparaging toward them. They can fill a similar niche in valuable ways. I really enjoy The Resistance: Avalon, for example, despite some marginal flaws I see with it.

But this one’s my favorite, for reasons mentioned. It’s the distillation of a bunch of tropes of the genre in their most succinct, condensed form, and it’s glorious chaos with just enough balance to reward thoughtful play.