Drinking without the camaraderie 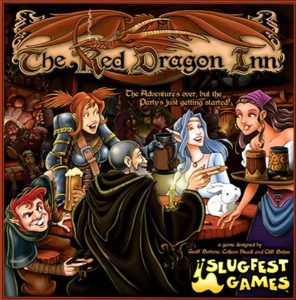 In the Red Dragon Inn (RDI) you are a fantasy adventurer in a tavern after a successful adventure, surrounded by your fellow adventurers. You spend the night drinking and gambling. This premise becomes a cutthroat battle to see who can keep their coins and sobriety the longest.

Each player has a unique deck that they use to manipulate their own fortunes or those of other players. Usually each character has a theme, which often makes them better at particular aspects of play (maybe the half-orc is the strongest gambler, while the swashbuckler is better at countering the attack cards of others). This allows you to push the game toward your strengths.

Players are eliminated as they run out of coins or as their constitution score meets their drunkenness score. Last one standing wins.

The unique player decks are interesting and provide some welcome variance to play. While there’s nothing wrong with the player boards and cards, it’s the central premise that acts as the hook here, not the art or components.

I generally enjoy “take that” mechanics. There’s a visceral thrill to direct antagonism, and the risk/reward that it brings.

So it took me some time to parse out why I always felt sour when playing RDI. The answer is that RDI is pretty much all take-that mechanics. There is very, very little here that is in any way positive. At best, you’re negating a “take that” card that someone else played. Some decks will allow you to regain certain stats, but it remains true that the game is almost entirely about inflicting punishment on one another, a necessity of a game with no win conditions but multiple loss conditions.

Everything is contextual, and a good thing in the wrong context can be a bad thing. For me, RDI steps over that line into cloying, Munchkin-style territory where “Haha! You’re more drunk now!” loses its luster after the 39th time it happens in the game, and you end up stuck in a slog for survival.

Player Elimination in Board Games

I don’t mind player elimination in theory, and enjoy a handful of games where it’s present. But there’s a reason the modern hobby has started to remove it more often than not. The balancing act required to pull it off well is not easy.

RDI’s big sin is that the game can last a while after early eliminations. In a game that boasts of being able to hold a large number of players (depending on how many of its numerous expansions you own), you could find yourself the first eliminated after 15 minutes in a 60-90 minute 12-player game. This might seem like an outlier, and it surely is, but I’d also defy someone to tell me that this couldn’t happen. I know for a fact that it can, because I’ve witnessed it. I consider that possibility alone to be damning, given the preponderance of gaming options we have available to us.

This will be mitigated at the base game’s 2-4 players, granted, but the game and its myriad expansions have definitely cultivated the belief that more is merrier, when that is probably not the case. But even at 4P, the possibility still exists for, say, a quick gambling elimination followed by a protracted war to maintain sobriety. Every game I’ve played has ended with the eliminated players glancing over from whatever task they bounced to (another game, cell phone, etc.) and asking “so who won?” This isn’t a formula for maintaining engagement.

Give me something more bounded like King of Tokyo or Tsuro of the Seas, where I’ll have sessions where I take some bad beats and I’m out early, but even at their lengthiest, I’ll have minimal downtime thereafter. Can RDI be as fun as them? Yes, particularly with the right group. But the variance in experiences makes it a much bigger risk than those others for me.

I’ve seen reviews that acknowledge this as a definite negative, but give the game a pass due to its other merits. I will give it no such concession. Maybe in 2007 this was excusable, but it’s not now. RDI can be fun, but you know what else can be fun? Several thousand other games that don’t have this flaw.

It’s not all bad, of course. RDI has a following, and not without reason.

The nuance inherent in different character decks can allow for different play styles, which is fun. Fans of the game enjoy exploring character options and finding those that best match their intended play style.

Distinct, thematic abilities are good in any game with variable powers. They help to create ownership, which heightens investment from players.

And I do enjoy the theme. Part of my frustration with the game is that I really want to like it more than I do. Slapping down cards over beers with friends is probably my most preferred style of gaming. There will be gamers who don’t find the faults I mentioned to be game-killing, and they’ll gleefully sink into the light roleplaying embedded into character/deck options.

I’ve had too many dud sessions to give it a pass, even among those like me who should be in the game’s target audience. But there’s still merit here.

Those who don’t like take that won’t enjoy this. Also those who want to plan things out turns in advance. There’s some subtle strategy here, particularly with the more nuanced decks, but it’s also often just reactionary.

RDI seems like it should be a riot. An elevator pitch of the game will seem exciting to nearly any gamer who enjoys playing with friends over drinks. I count myself among such gamers. Give me a good game, good friends, and a good beer, and I’m happy. And the bevy of roles and card types will give the game enough variance and nuance to keep some of those gamers entranced through multiple plays.

As evidenced by the game’s continuing success, there’s a sizable audience for this game. For me, though, there aren’t enough elements of interest to overcome the game’s significant drawbacks.

I played this a couple times recently after years of not having played it. I remembered it somewhat fondly, and was surprised when I was no longer a fan. However, when I first played it, I was brand new to the hobby. Like a cartoon show that you remember fondly from your youth, some age well, others don’t. For me, this one didn’t.