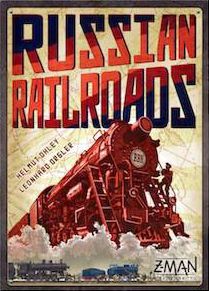 Stop me if you’ve heard this one before: a dense, engine-builder Euro that sees you largely focused on your personal player board and is a prototypical “point salad” game with numerous chaining effects that result in absurdly high point totals. Oh, also, it has a train theme.

Some of you are salivating already. Others have already tuned out. If your reaction was one of those two, nothing I’m about to say below is going to change your mind. For those in the middle, though, read on.

If that description were my intro to the game, I’d be skeptical of all the Euro tropes but curious at the nature of the engine and, frankly, I like trains. Regardless, I’m willing to give any game a fair chance, and have enough friends who really like this game that I wanted to see what the fuss was about, and see if I could join them in their excitement.

What’s in a Theme

I like trains and train-themed games, but I want to get this opinion out of the way: Russian Railroads (RR) should have had a different theme.

You see, “point salad” doesn’t do this one justice. This is point explosions. It’s point insanity. Every nook of the game’s snowballing systems will give you more points than you expect. Ending the game with 300+ points is almost a prereq for competing for the win. 400+ in some. And I’m sure more dedicated fans have stories of even higher.

When I play, I imagine one of those complicated, blinking pinball machines of the 1980s where you initially feel good hitting the most obvious areas that net you 100-500 points. But then you get the multiplier, and, once multiplied, you trigger bonus scoring and multiply again. Now new areas are unlocked that chain these exponentials together and suddenly you’re scoring 100,000 points every time you flick your pinball into its whirling, glowing abyss. Your score hits the one million mark, you glance at the high score to see if you have a shot at it, and you feel like a god…

So why not literally theme this as a pinball game? Or something similarly frenetic? I think it would be 10x funnier, and more thematically in-line with the way you build your point engine.

As it is, sure, whatever, mirthless Russian trains it is.

Moving the rail pieces forward on your tracks is the closest this gets to connecting with the theme. It’s very indicative of modern board games that you can score 400 victory points and the best thing you can say you did was construct some nondescript factories and laid rails through the unforgiving Russian landscape. I imagine the next game from the publisher is one where you can score 1,000 VPs for being the most depressed.

But seriously, if this game wasn’t in the Board Game Geek top 100, I’d say that fact is a hilarious parody of the Euro genre, on par with Cones of Dunshire. It’s the scene in the romantic comedy where the starry-eyed protagonist walks into his boss’s office with his brilliant idea to invigorate the whole business, and the boss is secretly KGB and shoots him in the face.

Or something. I don’t watch many rom-coms. But here, it’s a bonkers design where someone in the design process decided that there was just too much joy in the world to let the game really run free.

Anyway, whatever. Theme is not the draw here. I just needed to vent that gripe.

So are the point explosions enough to win me over? They’re a start, but let’s be real. The Pavlovian rush of points in games is something that keeps us coming back, but most gamers have played enough games that that isn’t enough by itself. We can acquire too many points in hundreds of games. Why are these Russian points better?

The answer is in the nature of the engine. This is worker placement, and all the tropes of that genre apply. Here, though, they gradually nudge forward one of four primary tracks on your player board, each of which is heavily laden with rewards than chain together and quickly become the pinball game of my earlier musings. It’s a rush to see them combine, and to watch as your round-to-round scoring starts as a trickle and quickly becomes a torrent of both points and new options to leverage your engine further.

Are their nits to pick? Yes, unfortunately, and some of them will be large flaws for some gamers. One is that the four tracks are always the same four tracks. The ways you can decide to chain bonuses are myriad, so there’s ample replayability, but I wonder if there’s as much replayability as others RR is competing with for shelf space and table time. I’m into double digit plays and still have strategies I’d like to try out that I haven’t yet, but that list isn’t inexhaustible, and I wonder what will happen once I’ve run, say, another 10-15 permutations on those same four tracks. Will I get as much joy out of squeezing efficiency out of those strategies as I do exploring them in the first place? I also wonder why I notice the four tracks here and not in the many other games that ultimately have somewhat linear options. Maybe it’s because they’re so explicit in RR, since you’re literally pushing something forward on one of four tracks most of the time. In reality, it’s likely no more or less bounded than others of its type. Subjectively, though, it feels like it’s more on rails (pun not intended).

The other gripe is more micro-level. Pretty much each round starts with the same move, because it’s the best one. The only exception is when only one player has coins (which are required for the move), which means everyone else has to pass on the that option, and they can wait.

Almost every round also has the same second move, because it’s next best. I have not seen exceptions among competitive players. And the third move will start to see some variation, but there are two spaces that will be chosen next about 90% of the time.

I didn’t list the actions by name for a reason; if you’ve played RR more than a couple times, you know what each of them is, and thus prove my point.

In a game that’s likely well-balanced overall, it seems bizarre to me that the beginning of rounds are basically scripted. There’s really never a chance to be truly surprising. I really enjoy getting to feel creative in games, even when they’re essentially complicated math problems, as this one is. Something about the typical opening sequence feels like it denies that desire.

The issue continues, though, because some spaces are explicitly better than others. So while, after those first few moves, play opens up a bit more, there are still spaces that you can guarantee will always be picked before others. It gives round progression a feeling of being formulaic. Granted, this feeling is somewhat illusory because you’re still having to prioritize your actions in meaningful, often difficult ways. Yet, there’s some disappointment when I can rank pretty much every action slot into tiers, and that hierarchy is rarely questioned throughout a game. Far better, to me, are those games where a forgotten slot suddenly becomes crucial, or an oblique placement gives way to a new strategy.

Long-time players will be able to cite exceptions, and I’ve seen some as well. My comments above might feel like hyperbole to some. But the exceptions are rare enough that I think my point stands.

Also to be clear, there isn’t a single dominant strategy. You can’t script things from game to game, because a lot will depend on what your opponents are pursuing. But I can’t shake the feeling of both round-to-round and game-to-game deja vu at times.

It then becomes an efficiency puzzle within that structure, as many Euros are. So am I missing the point somewhere here? To some, I suspect, I undoubtedly am.

Don’t get me wrong, the kinetic thrill of the snowballing point engine is enough to entertain me through multiple plays. The dizzying density of upgrade options within the various point tracks, and how they interact with one another, is a satisfying intellectual puzzle as well. And while direct interaction is basically nonexistent, you’ll want to keep an eye on your opponents’ boards to help you prioritize actions. This is faint praise who those who enjoy interaction in games, but it will be enough for those who love RR for the engine-building elements. RR has a following for a reason.

Ultimately, though, its strengths weren’t enough to win me over. I get more pleasure out of a lot of other worker placement games where there’s more interaction, and some actions don’t feel disproportionately better than others, thus increasing the number of interesting decisions you’ll have to make and, to me, increasing the tension of the decisions themselves.

I also get as much out of some mathy Euros where the structure – either on the main board or one’s personal player board – doesn’t feel quite so bounded. However, if I want to imagine away the Russian trappings of the theme and simply feel the visceral thrill of a 130-point round, lapping the board in one glorious leap, this game manages to deliver that feeling in a way even other point-heavy games often fail to. That counts for something, and is probably a level of absurdity that more point salad games should embrace.