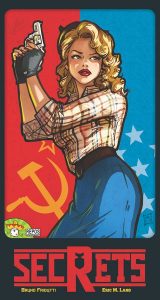 Secrets is an elaborate shell game, the kind carnivals have where you try to track the red or blue ball under a bunch of cups. Except here, there are two teams (technically three, though Hippies are on their own) and up to eight players, and you’re trying to figure out what color everyone’s ball is, so to speak, then tracks each of those balls so that you don’t flub up and make a move that helps an opponent.

You take turns drawing cards, presenting them publicly, then choosing one secretly and offering it to another player. They can accept or decline, the latter sending it back to you, and it’s flipped up for all to see. Whoever ends up with it gets the number of points it’s worth and gets to perform the ability attached to the card. The rub comes with the fact that having two of the same card turns both over, making them worth zero points each, and the card abilities, which often rearrange various roles to sow confusion and doubt. Usually you want more points – occasionally the least depending on role – but you always have multiple agendas to consider when either accepting, declining or offering a card.

The art is appropriate and the heavy plastic role chips are massive and awesome, clacking together with satisfying heft.

The cards themselves are a very weird size, which is my biggest complaint. I don’t think appropriate sleeves exist for them.

The player aids are all very helpful.

Ever play one of those games of Werewolf or Mafia where the people who are most experienced, or simply the loudest, dominate the game? It’s not fun for at least some at the table.

Secrets is more cerebral, and won’t allow a single player to take over. This is a welcome change of pace for me, even as someone who enjoys the more socially demanding deduction games like One Night Ultimate Werewolf and The Resistance. This is the only game I’ve ever seen enjoyed by gamer who, as a pretty strict rule, hate social deduction games.

It will also, always, allow you to employ some deduction, something I can’t always say when you get a non-active role in a Werewolf-style game.

It’s 100% possible to know what everyone at the table is in this game. Or have no idea what anyone is, including yourself. Or for everyone except you to know what your role is. Such are the shenanigans that can occur with the card abilities.

Most times, however, you’ll know some things but not everything. And somewhere in the mid-game you’ll figure out one of your teammates and/or enemies, and you might only have a small window in which to capitalize on that knowledge before they discover it as well. Once most of the table knows enough, games tend to end quickly, so if your team is down, you have to come back in a hurry or figure out a way to shuffle the role tokens to benefit you and/or confound others.

It’s this omnipresent possibility for deduction and swings that gives the game its tension. It’s not always perfect, though, as we’ll see.

Despite the presence of the UN token – which mitigates against someone never being offered a card – I’ve seen some players who have dud sessions, since the game can often be over fairly quickly. They either get an unfortunate series of abilities done to them, so that they literally know nothing at the table, or they don’t have a chance to apply their knowledge before the game ends. It’s never a long game, so that’s something, but that’s also not an excuse for being a poor experience just a touch too often.

There’s one time I’m not a huge fan of this game: at high player counts. This seems odd, because most social deduction games suffer at their lowest counts. But there’s a reason for this. At eight players, you might only get a couple turns or chances to respond to a card offer, before the game ends. The level of player agency dips dramatically at these numbers. What happens to you will rarely feel like something you helped to make happen. To say it’s often not great is an understatement.

It’s not unheard of for a game to be better at certain player counts, but rare that my enjoyment goes from “high” to “low” with the addition of just a few players, especially in this genre. There’s just too much downtime and not enough agency in the 7-8 player game. I really enjoy this game at 4-5, and it’s fine at 6. At 7-8, I don’t recommend it. It’s ok at that player count because it’s over quickly, but will rarely, if ever, be great.

A Fall From Grace

I have some cognitive dissonance with this game, owing to the positive and negative factors listed above. I REALLY enjoyed this game, but I think it was due to small sample size, and because I’m a sucker for actual deduction. Whereas most social deduction games have you working from your gut as much as your brain, Secrets often gives you enough to “solve” the table. I enjoy this.

But then I played a session where I literally did two things – gave a card and received a card – before the game was over. Then it happened again. Then I had a round where my only knowledge got thrown out the window early, so I knew nothing, and no tokens shifted after that point, so I was in the dark the entire session (including my own). Then, eyes opened to such flaws, subsequent plays started revealing that this was happening to at least one person in every game.

That potential for nuanced deduction is still there. But for some, it’s going to be wrapped in a lot of sub-par sessions. And, this being a 4-8 player game, how many groups are going to stick to 4-5 players exclusively, which will mitigate those flaws somewhat?

Despite not being as socially antagonistic as some social deduction games, it’s still social deduction. If that’s not your genre, Secrets might be the exception to that rule for you…or it might not.

Secrets scratches a unique itch for me in a genre filled with Mafia/Werewolf variants. That alone justifies its existence in ways that many other knockoffs struggle to. The fact that it’s also one of the more consistently reliable games in which I can actually stretch my deductive muscles (which is not assured in many of those same chaotic Mafia knockoffs) is another point in its favor. Secrets will never ascend into the transcendent ranks of games that provide the higher highs in gaming, and it falls flat with larger play counts where your agency is severely hindered. Yet, it will more reliably satiate my deductive itch without taking too long or offending in ways that more boisterous social deduction games often can.

I flatly am not a fan of this game at its highest player counts, because it increases downtime and decreases agency to onerous, fun-ruining levels. This is pronounced enough that it may be enough to withhold a recommendation of the game entirely. But at 4-5, it can be, and often is a tight, tactical, deductive experience. My difficulty in creating “ideal” sessions of Secrets led me to gifting my copy to a friend. We still play occasionally, which I enjoy, but it was not one I needed to keep around consistently.