This is my first game writeup for Solium Infernum. If you’re not familiar with the game, please check out my overview and review of the game, linked above. Otherwise, you’ll probably be lost in this writeup, which assumes at least a basic understanding of the game’s premise.

I may curse in this writeup when bad stuff happens, which it always does in this game. You’ve been warned.

I write this down now so that I can laugh at it later. But I do have an overarching strategy going in.

Archfiends have a few buckets they can allot points to:

Arthemys is focusing on two of these: base stats and rank. I’m the second-highest rank, meaning no one can easily bully me or ignore my demands. And base stats, among other things, give your starting army (Legion) higher combat stats. I want this safety blanket. Lastly, I have my Wickedness at level 3, which is only one away from gaining an additional order slot. Order slots are incredibly coveted in the game, so being this close to one at the game’s onset should give me options.

The build doesn’t suggest a particular strategy, but that’s by design. This is my first multiplayer game of Solium Infernum. For the others in the game, not so much. I’m the new kid in the class. I expect to be taken by surprise. So I want to be flexible in my approach.

Our game settings include some expansion materials (the game has a single expansion), including the census, which awards a point for each canton (hex) you occupy. This happens every 10 turns. So simply expanding one’s territory can be a big deal.

The other archfiend build I considered involved faster movement speed for my units to capitalize on this, but it put me too far from an additional order slot.

My initial strategy is to grab a Place of Power (PoP) or two early on (which grants prestige) and expand my territory with my main legion for about 10 turns, all while slowly working toward that extra order slot. By then, I’ll have tons more to react to. But my plan will be dependent on how things start off…

Well fuck. I am the furthest from any Places of Power, and the player immediately to my north (The Swarm) has done what I was thinking about: his units have three movement speed instead of two. If he’s smart – and I’m sure he is – he can block me from the closest PoPs. So I’m having to throw a bit of a Hail Mary from the start and take a winding path that I think will net me a +1 prestige PoP by Turn 3. It’s not much, but it’s a start.

There’s a cheap Legion on the Bazaar that will surely be taken in Round 1. I put in a bid for it, and since I did quite well with my opening resource haul, I add in a couple insurance resources to overbid. They can net me some Cantons and, if I’m really lucky, might be able to get me adjacent to Pandemonium or a +3 PoP. I doubt it, but we’ll see.

The Swarm is going for mobility. He’ll probably be bidding against me for the Legion, to expand his empire. If I can snatch it from him, that will be excellent. His Legion is powerful enough to take some PoPs, and I imagine he’ll be in a good early position shortly. I already hate him.

Black Coffee has a crap Legion with one movement, which means he took the Slothful attribute and very few base attributes, and thus has a TON of fiend points to play with. He’s a Prince in rank, which eats into those points considerably, and I think it eats up too much for him to believably have the Kingmaker trait. He’s either going hyper-specific in his strategy, or he has the Power Behind the Throne trait and may deliberately tank early on. My guess is a resource-heavy build, which will take a while to come online but could result in a Manuscript-heavy build that’s a nightmare in the late game. I already hate him.

The others…hard to tell. They have Legions similar to mine, but with lower ranks. Only Black Coffee outranks me, which is nice. I’ll be able to ignore many demands/insults that aren’t to my liking.

There are some tasty trinkets (artifacts and relics) on the Bazaar, including one that boosts a fiend’s Diabolism (Charisma, which affects resource haul). Everyone will want it. Black Coffee will probably buy it. I could compete for it, or a couple others I like, but would sacrifice Legion movement. I can’t risk falling behind on Prestige too much, so I need a PoP and Cantons as insurance. I’m actually hoping there’s an arms race for the relics. It’ll allow me to expand territory, with only The Swarm to worry about. I’ll take whatever’s left on the Bazaar after turn 10 or so.

By bidding on a Legion, I’m committing to using my orders for movement early on, which also delays getting my third order. If I can get a solid block of Cantons, the tradeoff will be worth it, but if we’re rounding Turn 20 and I don’t have a 3rd order, I may regret it.

Despite The Swarm trying to be a dick and blocking some of my routes, I managed to get my extra Legion, capture a PoP, and amass a reasonable landmass of Cantons. These turns were mostly spent in Legion movement.

What’s better, I got a second PoP (The Temple of Lust) that is also my public objective, which means it will net me 30 points at game’s end if I manage to retain it. So that’s a nice start.

The big event of these turns was that a Legion of Heaven swept through the map as a result of someone playing an event card. Everyone’s starting legions got wiped. It’s just devastation everywhere. I was targeted, but not before I got my PoPs captured. In all, not terrible, though it stings losing my legion.

Rounding into Turn 10, and the first Census, I have the Prestige lead! 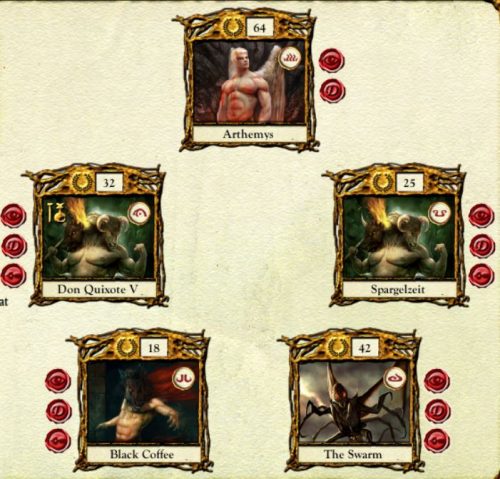 However, there are downsides:

Don Quixote has taken at least one perk that gets him extra prestige for PoPs, and possibly another that awards extra prestige in combat. He probably wanted a prestige win via land war, but with everyone decimated by the legion of Heaven, that will be tough. He’s also behind a couple of us in Cantons. He has an uphill climb.

Spargelzeit is still a mystery outside his strong opening Legion stats, but isn’t a thorn in my side yet either. He is currently the only fiend adjacent to Pandemonium, which is worrying. He may have been a threat to take Pandemonium, but after getting nuked by the Legion of Heaven, I’m not sure. He may pivot to a Praetor strategy. I don’t see his route to a prestige win via Cantons/PoPs/land war.

The Swarm had some bad luck related to the specific stats of his Legion. In a different stat configuration, he could have taken some better PoPs. Instead, he has one at +1 prestige per turn. I’m not sure what his next steps will be, and he’s probably playing from behind now too.

So it’s a good start, but Black Coffee is terrifying. He was the only one who clearly didn’t care about his starting Legion. The heavenly host slowed everyone down in their plans except him. I have absolutely no plan for him.

The plan for rounds 10-20 is to get my 3rd Order slot, and figure out a way to stretch out my prestige lead. Maybe I can put enough distance between me and the others that I can better weather the eventual onslaught I’ll face…

Check out Part II next!