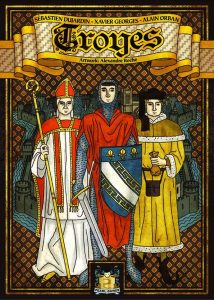 Welcome to the city of Troyes. We got your dice, your cards, your meeples, your influence points, your secret objectives, your Euro engine, your cutthroat dice stealing and meeple toppling.

And it’s…elegant? No, really. It all works well together, I promise.

In the medieval city of Troyes, you vie for the most influence (VPs) in a city with very distinct areas of power. Though the terminology they use is occasionally a bit different, these areas of power equate to commerce (yellow), the clergy/Church (white), and the military (red).

Players roll dice of these three colors – and a dummy player rolls a number of dice – and these dice are applied to locations on the board to gain a number of resources. Among these resources are more dice to roll on subsequent turns, money and influence points (which are primarily used to modify dice values and purchase new meeples to station on action cards), to combat threats to the city, and to gain the right to use action/ability cards that offer favorable resource conversions and VPs.

While most of the game’s VPs are scannable on the board, each player will have a secret objective (which applies to all players at game end) that can earn them additional VPs.

Finally, players are able to purchase the dice of others (including the dummy player’s), but this gets expensive in a hurry and can fund your opponents. So when and where you do this is key.

Troyes is widely considered a mid-weight Euro, despite the dice rolling, and has a good reputation in the hobby.

The components are fine, but it’s the art that will get attention. I personally really love how it evokes the time period. Others find it dull. That’s subjective, but it definitely sticks to its visual style quite well.

The board initially looks busy but is eminently readable once you learn the rules.

This is a dice-roller, but it will almost never feel random. Additionally, this is decidedly a Euro, but it will occasionally feel quite cutthroat. Let’s explore both of those statements.

The key to the former (non-random) is that while individual dice values will dictate some of your options, you’ll always have at least a few good options, and you will often be able to manipulate your dice – or “borrow” another’s – to bring your plan to fruition. The key becomes executing those plans as efficiently as possible. Do you purchase two dice and use an influence point to re-roll one of your dice to do something REALLY good, or do something somewhat less good but use only your own dice without any re-rolls? The game presents choices like this on nearly every turn.

The key to the latter (cutthroat) is purchasing dice. One way to create efficiency is to use the maximum number of dice per turn (3). But you’re rarely going to be able to do this with only your own dice, and the cost of purchasing dice goes up if it’s being added to a larger pool. So what this ends up creating is an environment where you will absolutely want to steal dice from under your opponents (giving them a fee, granted) but only when it will really hurt them or help you. It’s not constant warfare so much as measured, tactical strikes at opportune moments.

There’s also an exquisite balance between the three areas of play. You’ll never be able to dominate each area of the board in a reasonably competitive game, so you have to choose your areas of focus. But you can suffer from letting an opponent go unchallenged in a particular area, allowing them to create a formidable point engine and hoarding a particular die color.

The best thing I can say about Troyes is that, even after several plays, I am constantly presented with interesting moments where, for example, I see three things I could do that would be excellent, but realize that I’ll likely only get to choose one, and that the others will be gone by my next turn. Or a particular die could be used to grab a few VPs, or another die next round. Or I’ll deduce what secret objectives my opponents have, giving me flexibility, but don’t have the resources to go for each secret objective in play. So which do I prioritize, and how? These agonizing decisions are always enticing and never overwhelming.

Events are bad things that happen to city, thematically representing things like rival cities, famine, and invading forces. As a side note, these match up surprisingly well to real historical events in medieval Troyes.

It’s been pointed out that “combating” these cards is entirely optional, and it’s true. I’ve gone entire games where we haven’t really made a dent in them. However, they are incentivized in enough ways that I think they work well in the game, but without being so debilitating that it creates too much frustration in players. For example, an event card that hurts the Town Hall (Civil/Commerce/Yellow) may hurt you more than your opponents. Even if military (red) isn’t your thing, you’re likely going to want to get rid of that card. Additionally, the influence and point incentives make this a valid point track.

Troyes occasionally suffers from a lot of unique cards with unique iconography. This can make it hard to scan the action cards quickly to figure out how they might best synergize with one another. It can also make it hard to teach the game.

This is a legitimate knock, I won’t lie, but I don’t think this is too damning for Troyes, for one important reason: you’ll only see nine action cards in any game, and they are parsed out 3/3/3 over the first three rounds. So it’s never overwhelming to internalize.

If you want to see how this slight flaw can turn into a game-killing one, see my review of Tournay, Troyes’s slightly younger sibling that has languished in obscurity while Troyes has flourished. And I think the fact that it doesn’t overwhelm players in the same way with obtuse iconography is why it gained its foothold in the hobby where Tournay failed to do the same.

I pride myself on teaching games. I approach it quite seriously, and enjoy it immensely.

So for a game I enjoy as much as Troyes, it’s a frustration that I’ve never felt like I successfully taught this on someone’s first play.

Maybe it’s the iconography, mentioned above. Maybe it’s the unique balance of dice-as-workers-as-dice, or that the point engines aren’t always obvious until Turn 3.

Either way, this isn’t an easy game to learn. I actually disliked my first play of Troyes for similar reasons.

More so than many in today’s hobby, I’d say this game requires multiple plays to sink into its depths. If you’re anything like me, your first few plays will be spent simply learning the cadence of the game.

While I think this game sings at any play count, the additional rounds added to the 3P and 4P game – undoubtedly to allow for a similar number of total actions, given the dice pool sizes – do grow the play time a bit, and I’ve found myself preferring the more intimate tactical back-and-forth of a 2P game. A 4P game will be more reactionary, since it’s often impossible to predict what dice and resources you’ll have available to you by your next turn. While a well-timed die purchase can hinder your plans at any player count, I find myself more able to calculate multiple turns in advance in 2P games.

Euro gamers who don’t want mechanics that can directly hinder other players. The game never gets too nasty imo, but is also incomplete without that element of sniping, which some won’t enjoy. Also, if the art and theme don’t grab you, the game may seem overly abstract.

I suppose anti-dice-game people might not be persuaded either, but this occupies similar territory to Castles of Burgundy insofar as it really doesn’t feel like the rolls of the dice are what ultimately determine the outcome. They’re a central aspect of the game, yet somehow it’s your strategic decisions, not the exact numbers you get, that take center stage in how the game plays out.

Ladies of Troyes: A Word on the Expansion

The Ladies of Troyes adds a couple new mechanics that bring new options for deploying your dice, and new cards of every type to diversify the experience. It also adds a purple die that cannot be purchased by opponents and can be used as any color.

I really like the new cards; while the variable card setup in the base game gives it plenty of replayability, you’ll also see some of the same card patterns and secret objectives after just a handful of plays. With the expansion cards, it really does feel entirely unique every time.

I am not as big a fan of the round-the-board track that adds new meeple/dice options. The base game is so nicely bounded as it is, that this feels like subtraction by addition to me. Fortunately, you can remove this and keep the rest, which is usually what I’ve done.

And I’m indifferent on the purple dice, but some players won’t be. It mitigates the sharp cuts of dice stealing somewhat, but without eliminating dice stealing altogether, so it will soften the game slightly. Whether or not this is a good thing will depend on your gaming preferences. The overall feel, however, will remain largely unchanged.

Any Euro that stops at asking players to path the most efficient route through its mechanics will eventually lose me, regardless of how well it’s designed. It’s just how I’m built as a board gamer. However, once you inject a certain level of player interaction, which forces you to watch and occasionally directly interfere with your opponents, while also keeping the strategic trappings of a Euro, I’m probably hooked.

And so it is with Troyes. Once you internalize the iconography, the gameplay is elegant and never fails to produce interesting decisions with satisfying payouts.

Along with a select few others, it’s one of my shining examples of an “interactive Euro” that seems to find a great balance between the cerebral and the interpersonal.

There’s an excellent book called “Life in a Medieval City” (Amazon link) in which Troyes is the titular city that is examined. If you’re a super-fan of this game and want to learn about the actual history of medieval Troyes, this may be worth a read for you!

Most surprising to me is how much the game actually reflects the real-life balance of power that existed in the city through its various religious, military and mercantile groups, and how the event cards actually map (fairly) well to many tragedies that befell Troyes during the Middle Ages.