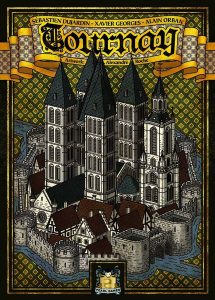 Fans of the game will push back on my description of it as “Troyes, The Card Game,” and we’ll talk about some of the differences later. But I do think that’s an acceptable shorthand response that will give a lot of modern gamers a sense of what the gameplay feels like.

Set in a neighboring medieval city, Tournay features three types/colors of cards (Yellow/Civil; Red/Military; White/Church) with different powers and abilities. In the game, you’ll be purchasing cards from various stacks, I, II and III of each color, and adding them to your own personal tableau. From this tableau, you’ll build an engine to acquire resources, extra actions, combat event cards that can harm one or more players, occasionally hinder your opponents, and ultimately gain victory points.

The art and theme are nearly identical to Troyes, giving the proceedings a familiar vibe to fans of its older brother.

This is the only review I’ve done that I’ve ONLY played digitally. There are reasons for this, as we’ll talk about later. But my only plays – and really, most of the plays that exist for this game at all anymore – are on Board Game Arena (BGA).

I’ll be honest, calling it “Troyes, The Card Game” fits like a glove for me. It scratches much the same itch, and much of the mechanical DNA remains intact. The primary mechanic that it ditches is the dice rolling. Those who love Troyes will also love the dice mechanics, as they’re central to the game. So something may be lost there. However, the ways in which you can benefit from and/or hinder your opponents are still present, if a bit more oblique. You’ll acquire rampart cards to protect against nasty event cards, which you may want to leave untouched so they harm your opponents more than you. And you’ll occasionally be purchasing real estate on their cards or forcing them to eliminate options on their tableau as a result of your actions.

It’s got a lot of Euro trappings, including worker placement/action selection, tableau building, and ramping up an engine as you purchase more powerful and higher scoring cards, but it’s also very interactive. Much like Troyes (which is a good thing, in my book).

So if this is simply a distilled variation on a well-loved game, why does no one know it exists? That question brings us to…

Troyes has some weird iconography that can make learning card abilities a little rough. However, you’re never having to learn more than a handful in a game, and they’re parsed out over the first few rounds. It’s manageable. Tournay, on the other hand, is an avalanche of obtuse icons that all refer to near-unique abilities and uses.

Your tableau will have at least 6-7 cards by the end, and depending on game flow could include 12-15. Adding to this, so will each of your opponents, and because of some cards’ abilities, you have to pay attention to each tableau if you want to play strategically. It’s…a lot to take in.

The only reason I can play this game is because BGA includes mouseover text for each card, and because I’ve learned I only enjoy it at 2P. Even after several plays, I need to use the mouseover text constantly to remind myself of abilities and how they interact (as well as those of my opponent(s)).

I frankly can’t imagine playing this while having to refer to a manual in the same way. Or rather, I can, but I can’t imagine being able to teach it to anyone and have them enjoy it on their first few plays, which is all the chance many games get these days before they’re relegated to collecting dust.

And there’s the problem, I think. Some gamers are willing to give a game multiple plays to sink in. Given the bevy of options we have, though, and had even in 2011, first impressions matter. I wasn’t “enjoying” Tournay for a handful of plays. While I think we should be more willing to give games time to reveal themselves to us, that’s just not how things work a lot of times. So is this problem really a huge sin? Probably not. But will it mean a lot of copies will sit unplayed? Absolutely. And that’s the true problem.

I’ve seen other games compared to this one that have similarly obtuse icons, yet gamers don’t seem to have a problem with them. While I think the chief mistake there is that you’re rarely having to absorb so much all at once even in other “bad icon” games to make informed decisions, it’s a fair comparison to make at times. For my own two cents, I think a lot of games get a pass that present themselves confusingly, when they shouldn’t get that pass. Maybe the hobby was collectively too hard on Tournay for this, but I can’t say it didn’t bother me (and bothered others, clearly).

I can’t find another reason why this game was such a dud when it was released, so I really do think this is a game-killing flaw, and one that makes it hard to recommend in a general sense.

The other thing I can’t help but notice is just how unwieldy things get past two players. The game only holds four, but even in a 2P affair, you’ll eventually have a lot of cards to cross-reference. This is again related to the problem of card density, as opposed to Troyes communal cards that are revealed slowly.

Look, eventually you could more or less learn the cards and account for them strategically on a regular basis. But even as I was getting to that place in my online plays, the ways in which everything could combine together made accounting for multiple players’ tableaus an onerously lengthy process.

Even if the iconography were somehow fixed, I’d struggle to get excited about this game at more than two.

Conversely, I really enjoy it at two. For its length and complexity, there are many interesting decisions and strategic avenues to pursue. It’s also just as interactive as Troyes, blending Euro-style engine building but without ever feeling like it’s only a math puzzle. You’re not building your tableau in a vacuum and will often want to thwart your opponent(s) instead of pursuing your own ends. This is one of the reasons Troyes is among my favorite games, and Tournay faithfully recreates these elements.

Those looking for a game that’s easy to teach, or don’t want to be looking in the manual a bunch for clarifications. Those who enjoyed Troyes but will miss the dice mechanic may also find this lacking.

Not only is Tourney not a bad game, it’s actually quite good. The depth hiding in its relatively simple premise can’t be overstated. In many ways, I think it finds a couple nice ways to streamline and distill the experience the designers first created with Troyes, which is likely the better game – and certainly more accessible – but has more overhead in terms of game length and components.

The sub-par language-independent rules, though, make this tough to play at first. It will reward those who push through that initial barrier, but won’t engage many long enough to want to push through it. This problem is extended by player count, making it something I’d only truly recommend at 2P.

If you’re interested, I’d encourage you to create a free BGA account, learn the rules and give it a try. I think you’ll be pleased. However, even if this were still in print, I’d sadly stay away from a physical copy.