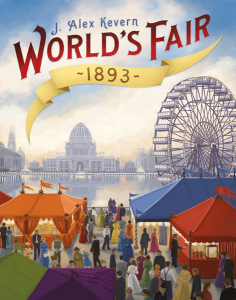 The year is 1893 and you’re trying to gain the most influence at the Chicago World’s Fair.

The game is area control and set collection. Cards are acquired with cube placements in one of five areas of influence, and control of those areas at the end of each of three rounds determines how efficiently you can turn your exhibit cards into sets worth lots of VPs. Additional card types include “Influencer” cards (not the Instagram kind) that will give you extra cubes or abilities to move them around, and ticket cards that let you “ride the Midway” (the ferris wheel). These are worth a VP each and act as your round counter. How much they bunch together will make some rounds longer or shorter.

It’s relatively lightweight by gamer standards, so if you’re at all familiar with those mechanics, you’ll understand the game very quickly.

The components for this game are a delight. The modular board pieces revolve around a central ferris wheel that acts as the game’s round tracker, the colors and art are all evocative and the card art is thematic.

Moreover, the flavor text on the cards, which provides historical facts about the fair and its exhibits, is some of the best flavor text I’ve ever seen in the hobby. This, to me, is the different between the game being abstract in some senses and moderately thematic. Whereas flavor text is frequently an afterthought, here it deepened the experience by making me interested in the historical context of the game.

The Appeal of the Middle

There’s a type of game that I don’t think the world will ever have enough of: they’re the pleasant, 45-minute games that I can teach to anyone, but can also play with anyone. I’ve played this with my non-gamer mom, and my hardcore gamer friends, and many in between. The beauty is that 1) it’s easy to learn for new gamers, 2) possesses enough depth that gamers can enjoy it, but 3) also has enough randomness and a forgiving strategic learning curve, so that new gamers will stand a chance against more experienced players, and 4) plays quickly enough that it never overstays its welcome.

In that sense, it fills a similar niche to Lanterns: The Harvest Festival, another game from Foxtrot (the publisher).

Many games attempt to fill this niche, but satisfying all four of those conditions is not an easy task. I think several games that some gamers enjoy fulfill 2-3 of those conditions, and that’s enough for that particular gamer to enjoy it, but not enough for it to be as universal as something like World’s Fair. I’ve played this game with dozens of players; all but one thought it was a good game, and that’s exceptionally rare in an increasingly particular and specialized hobby.

To be clear, a game that could appeal to nearly anyone also won’t be the favorite of anyone. World’s Fair isn’t best-in-class in a particular category. But that’s not the point. World’s Fair is one of the easiest games I’ve ever found to simply pull and enjoy, without worrying about who I’m introducing it to or what their play preferences are.

One of the criticisms sometimes levied against the game is that there’s often a “right” answer of which space to place your cube in, since they quickly become asymmetrical with number of cards. While this is sometimes true, I prefer to view the game through the lens of the turns where you’ll be rightfully torn between more cards or spaces that will net you more influence. Or turns where you have a choice between the same number of cards, but one will net you immediate VPs vs. another that will net you nothing immediately but may be better long-term.

Not every turn will produce these decisions, so it’s a fair criticism. But that’s also what makes the game accessible for newer players, and reduces overall game time. And no session will lack some tough decisions.

The Other Side of “Likeable”

I play in a large club with a rotating cast of attendees. Some regulars, some sporadic, and always some newbies. It’s fun, and a great way to meet people. And I would bring World’s Fair a lot, and suggest it a lot, and get it played a lot, and it was enjoyed a lot. Can you feel the turn coming, though? While everything is true that I said about eminently pleasant games that can appeal to a broad audience, if you’re the one playing it and teaching it a lot, it’s eventually going to feel a bit same-ish. I stopped being excited to play, and eventually it was just something that I didn’t object to.

I sold World’s Fair. I still think it’s an excellent game. But I had gotten my mileage out of it after a few years of ownership. That’s fine; not every game is meant to be a “forever game.” So I don’t think it’s a knock, necessarily, but it’s a consideration. There’s a limit to the interest it will provide for a regular gamer. My attention for it waned after a few years of ownership. Some people hit this kind of limit with games in a few months. For others, it takes several years. For a select few games, you may never tire of them.

My plays are spread amongst a larger number of games due to the number of people I play with. So, for example, even if my interest will start to wane after 20 sessions of a game, that might represent 4-5 years of ownership. So it was a worthwhile purchase, and will be for many others (including those who don’t tire of many gateway-style games). For me, it was absolutely worth it, but also the right decision to sell.

It’s a light game with somewhat low interaction. The theme and components bridge this gap a bit, but fans of more densely strategic, or more obviously interactive games, may eventually become bored by this.

World’s Fair 1893 is a surprisingly thematic, light Euro-style game that plays in a breezy 45 minutes even with new players, and packs enough strategy that a gamer’s eyes won’t glaze over. I’m frankly never itching to play this game at this point, but I am also never opposed to playing it. I also enjoy introducing it to new players, because it’s one of the more reliably enjoyable games I’ve encountered. Imo it should be mentioned more often among the hobby’s excellent gateway or family games.