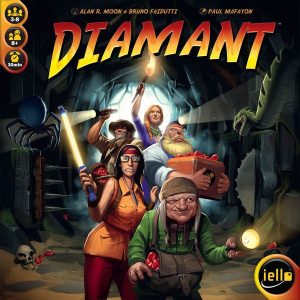 Let’s pull the band-aid off early: Incan Gold/Diamant is my least favorite of the “press your luck” games that I’ve reviewed recently (one or two of which may be forthcoming), a group that includes Can’t Stop, Buttons, Celestia and Quacks of Quedlinburg.

Well, ok, I lied. It’s probably better than Buttons, though only marginally. And that last one (Quacks) is almost a different type of game altogether due to the additional complexity, but its appeal – the tension of the “go for it or not” decision – is still at its core. The others, more direct competitors with Incan Gold, at least offer the universal tactile fun of dice rolling or more nuanced decision making to accompany the press your luck core. Only Buttons inspires a similar indifference in me.

Here, though, as opposed to many I just mentioned, it’s a binary decision: go deeper into the dungeon/forest, or head back. That’s it. No kinetic joy of the dice rolls, no deeper strategy to unfurl. Just an intuitive guess at what will be the best time to return with your wares, hoping you’re right. If you’re hoping the components or artwork will draw you in deeper, it won’t. The art is ok at best and it’s designed as a small-box game, more for portability than style.

“But Mark,” you say, you hypothetical devil’s advocate! It’s small, quick, easy to teach, light and fun, blah blah blah. So are many fillers. This doesn’t streamline or iterate on anything, or perhaps it’s so streamlined that it becomes utterly repetitive. My second play of this is what I imagine my 50th game of Can’t Stop would feel like. I enjoy Can’t Stop considerably, but it’s simple enough that many will tire of it eventually. This happens almost instantly with Diamant.

To throw it a bone, there’s a psychological mind game of turning back at the right time that can become hairy at higher player counts. If someone enjoys this game, it’s because they enjoy that feeling. You’ll laugh when everyone decides to turn tail at the same moment, and everyone groans in unison. Or even better, when all but one do this. It’s a game, after all. It’s not watching paint dry. There’s still fun here.

However, for me, this is what will keep it interesting for a few plays before it becomes a bore. It’s still ultimately a guessing game with the same A/B decision to make over and over again. Even Can’t Stop has a cursory bit of strategy and the kinetic fun of dice rolling.

And Celestia, probably the closest comparison in terms of feel, wraps this same “keep going or sidle off to safety” decision in a format with more sources of uncertainty, more meaningful decisions, more potential for bluffing, and even a few special ability cards to liven things up, none of which detracts from the central tension of the decisions being made. I feel as though I’m interacting with my fellow players in that one. Here, I’m just guessing. There’s no real bluffing, for example. Even if you dislike Celestia’s additional bells & whistles, you can legitimately and wholly bluff your way to a better outcome in it. The interpersonal stakes are higher. But here, it’s just hoping you make the right guesses.

This whole review has me on edge, because I feel like I’m missing something. I’ve even watched multiple reviews and how-to-play videos on it to make sure I wasn’t taught incorrectly or something. My reviews attempt to unfurl the rationale behind someone’s potential enjoyment of a game, even if I don’t share that enjoyment (or vice-versa when I love a game and talk about who won’t like it). There’s fun here, but I’m struggling with the love I’ve seen for it among people whose tastes generally align with mine.

Imagine my surprise, for example, when Shut Up & Sit Down wholeheartedly recommended this. Their tastes generally match up quite well to mine. I’ve disagreed with them, of course, but never this starkly. Hell, Tom Vasel, the Godfather of board game reviewers and head of The Dice Tower, called this a “must have.” His rationale included how quickly it plays and the fact that it holds a bunch of players and works well at those higher player counts.

So clearly there are thoughtful, experienced reviewers who disagree strongly with me. You might too.

Ok, so Tom’s is a take I can agree with. Nothing I’ve compared it to within the push-your-luck genre is even playable at 7-8P. And it plays too quickly to genuinely be onerous. Indifference is really the strongest emotion I can muster toward it.

So it may be a nice filler for a larger crowd when you don’t want, say, a more traditional party game or a social deduction game. I would still argue that that’s a pretty darn specific “what if” scenario in order to find an audience for this game, but it does exist.

I also had an online acquaintance tell me that this game is a riot with kids. And I can see how it absolutely could be.

At most player counts and in most adult groups, though, I can’t find a strong justification for this over not just other press your luck games, but numerous shorter games competing with it for table time.

Consider me the dissenting opinion, then. Even well-regarded games will unexpectedly fall flat for some gamers. It happens.

But for me, despite small spikes of hilarity, this is a game wrapped in so-so packaging with bland art. And more importantly, it feels like I’m just pressing one of two levers over and over again in the hobby’s simplest Skinner Box and hoping the pellet comes out.